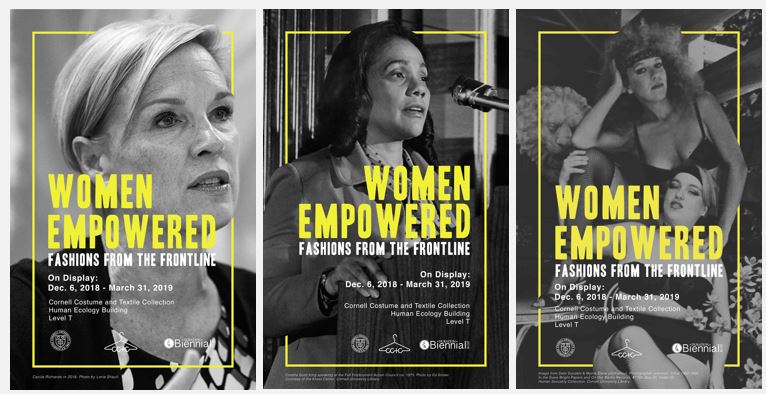 from WXXI piece by Caitlin Whyte, " “Women Empowered: Fashions From the Frontline,” is an exhibit at Cornell University chronicling the ways women have used fashion throughout history to collectively uplift themselves.... Denise Green is a faculty member in the fiber science and apparel design department in the College of Human Ecology at Cornell University. She says the “Women Empowered” exhibit is the result of a semester’s worth of work between her and a group of students. ...

The initial idea for the project began about a year ago as she was thinking about politics and the women’s marches that took place after President Donald Trump took office.

“And trying to uplift myself by thinking about some of the ways in which women had come together, created solidarity, supported and uplifted one another through fashion, so immediately I’m thinking of the pussy hats…”

A wall of the iconic pink hats are on display in one of these hallway cases. Most of the knit hats are on loan from local women who have worn them to local marches. Dozens of hats are in front of us: some bright, some subdued, some one color, and some a variety of shades.

“To me when I look at this, we have maybe the first original, kind of “stereotypical” hat in mind. But then if you just look at the array that we have in color and shape and texture, I think it can kind of show that everyone has their own interpretation of what the symbol could be.”

The exhibit is centered on space and place, where women have used their fashions for empowerment. This led to five sections: The government, the street, the academy, the arena, the stage.

Some of the garments display a straightforward message, like the suffragist sashes or the 1199 Union paper hats, but others are more focused on a backstory.

Du Puis shows me a number of shoes on display, including the peach canvas sneakers worn by 29-year-old Alexandria Ocasio-Cortez as she campaigned for her now historic win as the youngest woman ever elected to the U.S. House of Representatives.

There’s also a pair of red sneakers worn by an early female performer in Barnum and Bailey’s Circus.

“It’s an interesting parallel. I think it’s nice that we have these shoes in addition to the Alexandria Ocasio -Cortez because it’s different ways that women have quite literally worn through the holes of their shoes in their daily actions. To me it is a nice juxtaposition.”

Green touched on the topic of women’s work as well.

“The wear and tear on your clothes tell stories, too. And often we display very pristine garments in fashion exhibitions, and we wanted to kind of undermine that idea and show how the work that women do every single day on the front line, which we’re interpreting metaphorically, how that transforms clothing, too.”

She is passionate about fashion and its place within a society.

“Clothing is actually a really critical site of cultural production. It’s where we convey who we are, where we come from, and what we want the world to be. And so we are always being and becoming in our clothes and presenting ourselves to the world.”

Dozens of more items are on display, including jerseys from the first women’s hockey team at Cornell, decorative collars from Supreme Court Justice Ruth Bader Ginsberg, and a pair of suits worn by former Texas Governor Ann Richards and her daughter, Cecile Richards, the former Planned Parenthood president.

“Women Empowered” will be on display in the Human Ecology Building at Cornell University through March 31.

elevators from HEB parking garage nearby