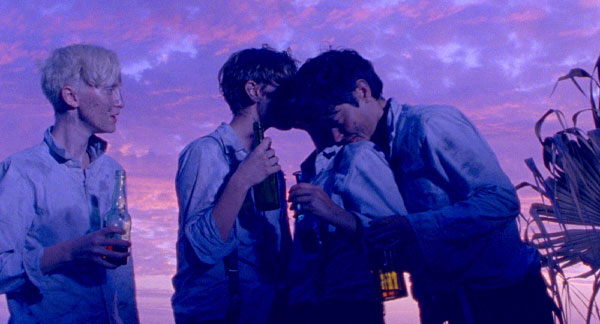 "[A] gender-bending, influence-scrambling adventure tale about five teenage miscreants sent on a boat journey with a mysterious Dutch captain who has promised to bring them back to their parents as obedient boys-or not at all.... Bertrand Mandico cast five of France's most talented young actresses to play the boys and immersed them in a seamless blend of luxuriant island locations and unabashedly artificial sets, creating a manifesto for narrative and aesthetic freedom in which a slew of influences (Joseph Von Sternberg, R.L. Stevenson, Jean Genet, RaÃºl Ruiz, Kenneth Anger) add up to a film unlike anything we've seen before." (Tournees Film Festival)The boys "land on a tropical island filled with sensual delights and, partaking of the island's pleasures, the boys' bodies start to transform, softening, developing breasts, shedding phalli, which sends them into a terror before they eventually embrace their new forms.... The Wild Boys feels like a Guy Maddin production by way of early Todd Haynes, with an unabashed erotic streak. It boldly dives into the in-between, the liminal spaces where bodies simply are, existing in any form they take, rather than relegated into social categories." (LA Times)"Cinematographer Pascale Granel... oscillates seamlessly between textured black-and-white photography and dreamlike colour sequences to give the film its rich mysteriousness and poetic beauty. The result is a kind of cinematic delirium; an aesthetic hallucinogen that emphasizes the bizarreness of this tale even further, whilst also creating a psychedelic atmosphere that succeeds in leaving the audience feeling buoyant, rather than lost in a sea of cinematic footnotes." (Cine Vue)website: alteredinnocence.net/wildboys