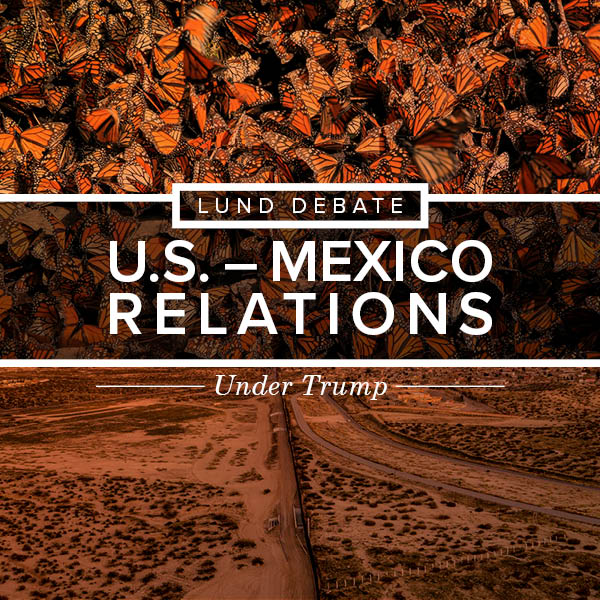 As part of the Mario Einaudi Center for International Studies' Lund Critical Debate series, two former ambassadors, one from the U.S. and one from Mexico, debate the implications of changes in U.S. foreign policy toward Mexico under President Donald Trump. Trade, migration, and security are top issues.

The Lund Debate speakers are Sandra Fuentes-Berain, Ambassador Emeritus for Mexico, & Roberta Jacobson, Former U.S. Ambassador to Mexico. The debate will be moderated by  Gustavo Flores-Macías.

Sandra Fuentes-Berain is Mexico's Ambassador Emeritus. Fuentes-Berain received this lifetime rank in 2012: she is the first woman to receive the title and one of only five granted the honor by Mexico’s Foreign Service. She served as the Consul General of Mexico in New York from 2013 to 2016. She also served as Mexico's ambassador to various countries, including Belgium, Luxembourg, the Netherlands, France, and Monaco, between 1984 and 2016. Fuentes-Berain studied law at the National Autonomous University of Mexico, completed the Foreign Service Examinations with a high score in 1972, and was immediately appointed to the Mexican embassy in the UK.

Roberta S. Jacobson is a senior advisor at the Albright Stonebridge Group.  She served as the U.S. Ambassador to Mexico from May 2016 until her resignation in May 2018, retiring from the State Department after more than 30 years. She taught at the University of Chicago’s Institute of Politics as a Pritzker fellow in Fall 2018. Jacobson previously served as the Assistant Secretary of State for Western Hemisphere Affairs, held various positions in the State Department’s Western Hemisphere Bureau, embassies in Argentina and Peru, and the White House. Jacobson holds a Master's of Arts in Law and Diplomacy from the Fletcher School of Law and Diplomacy (1986) and a Bachelor of Arts from Brown University.

Gustavo Flores-Macías, associate vice-provost for international affairs and associate professor of government in the College of Arts and Sciences, will serve as moderator. His research focuses on the politics of economic reform, taxation, and state capacity. His books include After Neoliberalism? The Left and Economic Reforms in Latin America (Oxford University Press, 2012) and a recent edited volume, The Political Economy of Taxation in Latin America (Cambridge University Press 2019).

Event is Free and Open to the Public

I had to miss this talk. Is there a recording I can watch later?
sjl8@cornell.edu