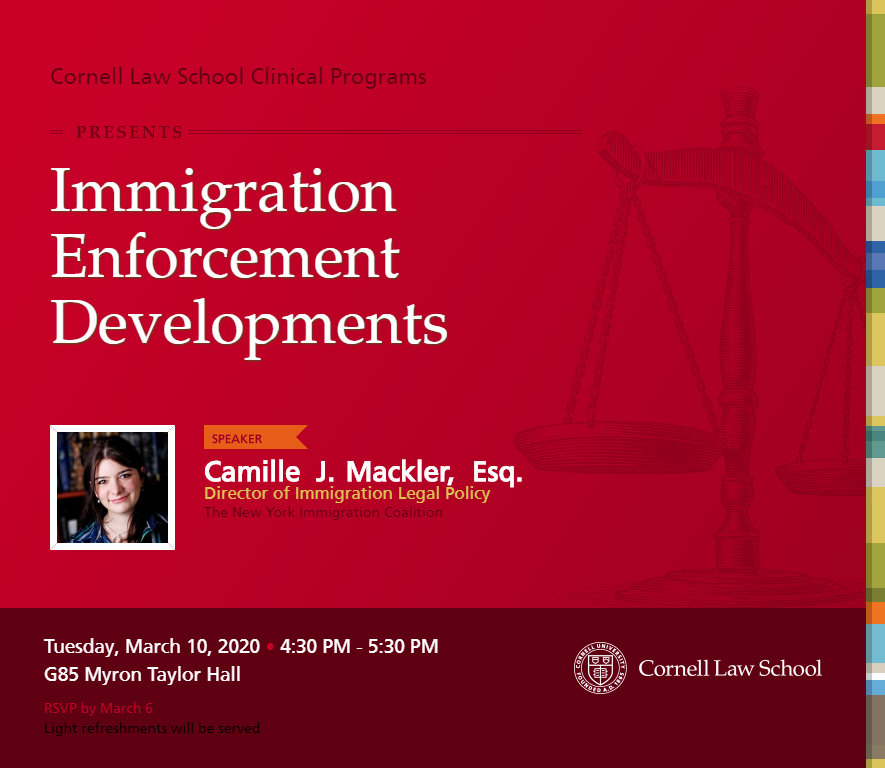 Light refreshments will be served

Camille J. Mackler, Esq. is the Director of Immigration Legal Policy at the New York Immigration Coalition. In that role, she leads advocacy campaigns to improve laws and policies for the benefit of immigrants across New York State. Ms. Mackler has led a number of important campaigns, including, most recently, coordinating legal efforts at JFK airport during the travel ban targeting refugees and citizens of seven countries and at the Albany County Jail after the largest one-time transfer of asylum seekers from the Southern Border to New York State. She has successfully advocated for protections for immigrants seeking legal assistance, including helping draft the first-ever state law creating a statutory right to counsel for immigrants facing deportation in New York.  She has also successfully pushed for significant increases in public funding of immigration legal services in both New York City and New York State, helping pass a 2014 New York State law deemed one of the strongest consumer protection laws in the country, creating and chairing the Protecting Immigrant New Yorkers (PINY) Task Force, a group of federal, state, and local government and law enforcement agencies, grassroot advocates, and legal service providers that works on reducing instances of immigration services fraud, and pushing for the creation of immigrant concerns-specific units in 9 District Attorney offices.  Ms. Mackler also worked directly with New York State government to create and shape the Office for New Americans, the nation’s first permanent state agency exclusively dedicated to the wellbeing of immigrants and, more recently, the Legal Defense Project, a unique public-private partnership spearheaded by Governor Andrew Cuomo to provide immigration legal services to New Yorkers. Ms. Mackler has also worked on numerous pieces of legislation in New York State and New York City aimed at support immigrant New Yorkers.

Since early 2017 she has spearheaded the creation of the Immigrant Advocates Response Collaborative (“Immigrant ARC” or “I-ARC”), a legal service provider collaborative that includes nearly 80 organizational members who pool expertise and resources to protect immigrants in the face of increasingly draconian immigration enforcement.

Nationally, Ms. Mackler helped to obtain Temporary Protected Status (TPS) designation for Nepal in 2015 and to have Guinea, Sierra Leone, and Liberia re-designated for TPS in 2016. She has worked on legislation to provide status to immigrant 9/11 first responders as well as legislative efforts to combat immigration services fraud.  She also works closely with Congressional staffers on issues relating principally to access to justice and access to counsel for immigrants.

Ms. Mackler is an immigration attorney with over fifteen years of experience representing immigrants before US Immigration Courts and Federal Courts of Appeals and a frequent lecturer on immigration laws and policies. Prior to joining the NYIC, Ms. Mackler was in private practice and focused primarily on asylum and refugee, deportation proceedings, immigration detention, and family-based immigration issues.

Ms. Mackler has a Juris Doctorate from New York Law School and a Bachelor of Science in Foreign Service from Georgetown University’s Walsh School of Foreign Service, and is a fellow with the Truman National Security Project. She currently serves as the Chair of the New York State Bar Association’s Committee on Immigration Representation.  As the daughter of celebrated journalist Peter Mackler, Ms. Mackler is also committed to supporting training and protections for ethical journalism worldwide. To that end, and in partnership with Agence France-Presse and Reporters Without Borders, she helped establish the Peter Mackler Award for Courageous and Ethical Journalism, shaping the award program in its early years. She continues to sit on the Board of the Global Media Forum Training Group, which oversees the Award.