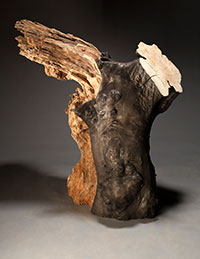 These five pieces were once part of a living heritage tree located in the F.R. Newman Arboretum, part of the Plantations at Cornell University in Ithaca New York. It was known as the Treman Weeping Willow, planted 80 years ago, around the time of the garden’s founding. In 2011, the tree had to be cut back to its base, as it could no longer support itself, succumbing to age and carpenter ants. Rather than being chipped for mulch, the sculptor, Jack Elliott, asked that the tree segments be delivered to his studio at Cornell University. He did not have a preconception of the results but was intrigued by the burled surfaces and irregular forms. The objective was to rework the pieces to let them reveal their own significances. As the bark and rotted material were removed, judicious cuts were made, allowing various forms and narratives to emerge. Five separate but related pieces were produced, all expressing a sense of uneasiness or tension, characterized by an interplay of organic and planar  forms and a contrast of blackened and natural surfaces.  The exhibition will be on display until the end of April in the lobby of the Nevin Welcome Center at Cornell Plantations.