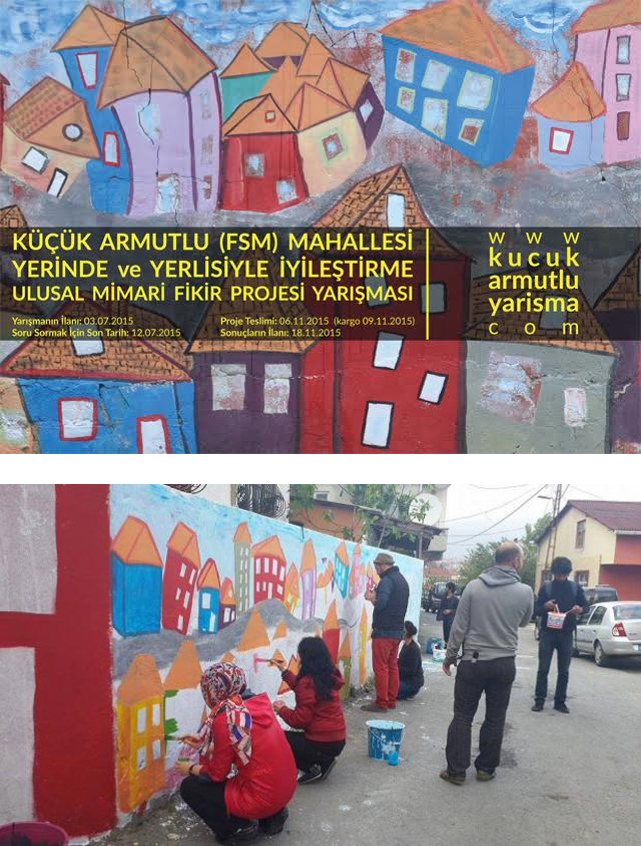 The Work of Architects and Scholars in Times of Turmoil: Urban Renewal of Istanbul

A panel with Senem Doyduk and Ayşe Çavdar, moderated by Esra Akcan and Peter Christensen

The CNY Humanities Corridor working group will extend the goals of the lecture series "New Approaches to Scholarship and Pedagogy of Ottoman and Turkish Architecture," for which three lectures were organized in 2015, and two panels in 2016. During the academic year of 2017, the working group engages with and responds to the violations of academic freedom and civil liberties in Turkey through the course of the past years. In the panel “The Work of Architects and Scholars in Times of Turmoil: Urban Renewal of Istanbul,” Senem Doyduk will present her architectural projects for Küçükarmutlu in Istanbul, which was one of the rare participatory urban renewal initiatives in Turkey that would not have displaced the residents. Ayşe Çavdar will analyze how neo-Ottomanism functions during the process of destruction and reconstruction of Istanbul’s sites. While the panelists will answer questions, if any, about their specific experiences with the violations of academic freedom and civil liberties in Turkey, the basic intention of this panel is to create a platform to share their academic and professional work with the international academic community.

Senem Doyduk is an architect and scholar. She is an Assistant Professor and Vice-Chairperson in the Department of Architecture at Sakarya University in Turkey. After her B. Arch studies in the Department of Architecture at Trakya University, she graduated from the 9 Eylül University with an M.Arch degree in Architectural Conservation. She completed her PhD degree in Architectural and Urban Conservation at Yıldız Technical University. She had worked at Balıkesir University, Yıldız Technical University, Doğuş University in Turkey, Girne American University in Northern Cyprus, and had conducted research at Canterbury University, as well as at Oxford Brookes University, both in UK, in the field of Vernacular Architecture for her post-doctoral degree. Throughout her academic practice, Doyduk has been involved in numerous research projects, academic publishing and architectural projects on the practice of architectural restoration and conservation, and shared her studies at various national and international platforms. She has taken the responsibility of the documentation, surveying and restoration of Akhiropoitos Monastery. She has conducted several workshops most of which are based on 'design-and-build' approach, mainly with students, particularly concentrated on rural or poorer urban areas. She took part in organizing architectural competitions and hands-on participatory / collective building workshops in these areas.

Ayşe Çavdar is a postdoctoral fellow in Käte Hamburger Kolleg/Center for Global Cooperation Research in Duisburg, Germany. She graduated from the Journalism Department at Ankara University, and received a Masters' degree in History, from Boğaziçi University.  She completed her Ph.D. dissertation "The Loss of Modesty: The Adventure of Muslim Family from Neighborhood to Gated Community" at the European University of Viadrina, in 2014 (supported by Global Prayers Project initiated by MetroZones). She has worked for the Helsinki Citizens Assembly's project "Citizens Network for Peace, Reconciliation and Human Security" in Western Balkans and Turkey. She served as a visiting scholar at the Center for Near and Middle Eastern Studies, Philipps University, Marburg, in 2016. She co-edited (with Volkan Aytar) Media and Security Sector Oversight, Limits, and Possibilities (TESEV, 2009); and (with Pelin Tan) “The State of Exception in an Exceptional City” (Sel Yayınları, 2013).

Cornell Society for the Humanities

2017 Project: “The Work of Architects and Scholars in Times of Turmoil: Urban Renewal of Istanbul”

Cornell welcomes participants with disabilities. Please contact Claire Swensen by Thursday (11/30) at (607) 255-7592 or email chs229@cornell.edu to discuss disability accommodations needed to participate fully in this event.