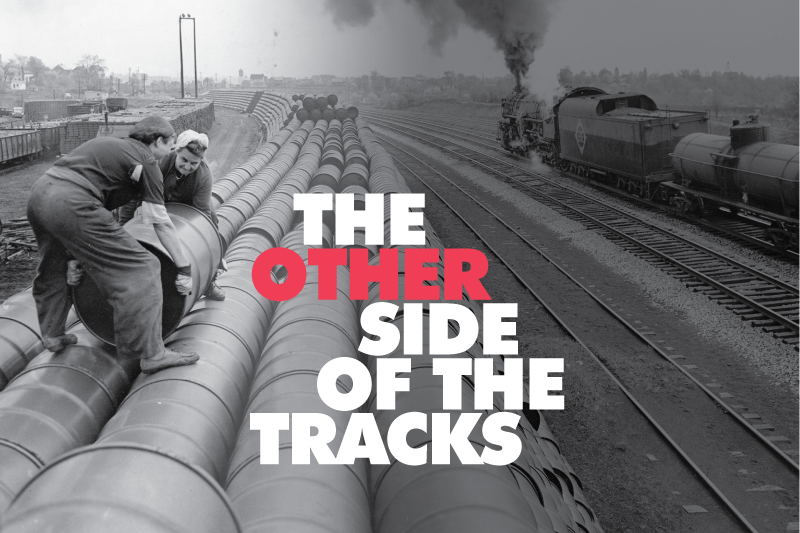 The Other Side of The Tracks: Discrimination and Social Mobility in the Railroad Industry

"The Other Side of the Tracks” traces the historic struggles and successes of African American and women railroad workers in the twentieth century. This exhibit will be displayed throughout Spring 2020 in the Kheel Center’s lobby located in Ives Hall, ILR School.

Working on the railroads provided both financial and societal standing for numerous Americans, and for traditionally excluded populations, the struggle to attain these benefits often meant fighting discrimination and violence from both management and the labor unions that were meant to protect. "The Other Side of the Tracks" highlights the role of the Ladies’ Auxiliaries in helping railroad unions achieve their aims; the roles performed by women railroad workers during World War II; the struggle of the Brotherhood of Sleeping Car Porters (BSCP), the first African American union chartered with the American Federation of Labor (AFL), against the powerful and exploitative Pullman Company; the work of the President of BSCP and civil rights leader A. Philip Randolph; and the gender stereotypes and discrimination that persisted in railroad unions throughout the twentieth century. The exhibit also documents the violence and hardships faced by African American trainmen in the Memphis District of the Illinois Central Railroad during three waves of white terrorism from the 1910s to the 1940s and the union they formed to try and protect both their jobs and their lives.

This Kheel Center exhibit is on display in the ILR School's Catherwood Library lobby through August 2020.