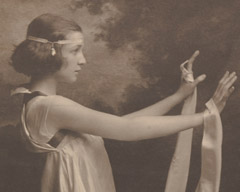 Ithaca was dubbed “The Biggest Little City” when, from 1914-1919, it was home to Wharton, Inc., a bustling movie production company that produced hundreds of films and serials starring some of the best known movie actors of the day:  Irene Castle, Lionel Barrymore, and Pearl White.

The Biggest Little Fashion City: Ithaca and Silent Film Style explores how silent film revolutionized dress and fashion communication, spanning the 1910s through the late 1920s: the heyday of the silent film era. Moving pictures chronicled the changes in dress, accessories, and hair. By including garments and accessories worn by silent film stars such as Irene Castle and Minnie Maddern Fiske and featuring garments from the designers who dressed these stars, we show how silent film enabled new fashion possibilities, which were later adopted by the masses and came to epitomize 1920s style.