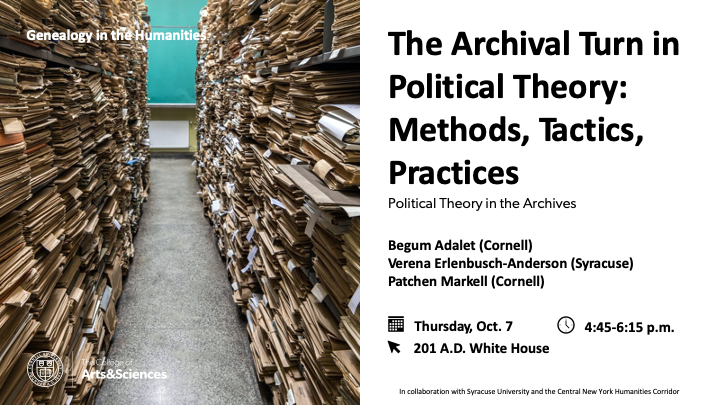 Genealogy in the Humanities invites you to the inaugral event of this year's programming on the theme 'Political Theory in the Archives' with a seminar on methods, tactics, and practices of archival inquiry in political theory research. Invited speakers include Professors Begum Adalet (Cornell),  Verena Erlenbusch-Anderson (Syracuse), and Patchen Markell (Cornell).

Begum Adalet (Government) is a political theorist with research and teaching interests in anticolonial thought, transnationalism, the Cold War, development, the built environment, and the Middle East. She is the author of Hotels and Highways: The Construction of Modernization Theory in Cold War Turkey.

Verena Erlenbusch-Anderson (Philosophy) works in political philosophy and contemporary European philosophy, with a special interest in critical theory and genealogy. She is the author of Genealogies of Terrorism: Revolution, State Violence, Empire.

Patchen Markell (Government) researches modern and twentieth-century European (especially German) and North American thought in its intellectual and political contexts. He is the author of Bound by Recognition and a general editor of the Critical Edition of the Complete Works of Hannah Arendt.

The Society for the Humanities, Government

Government; Society for the Humanities