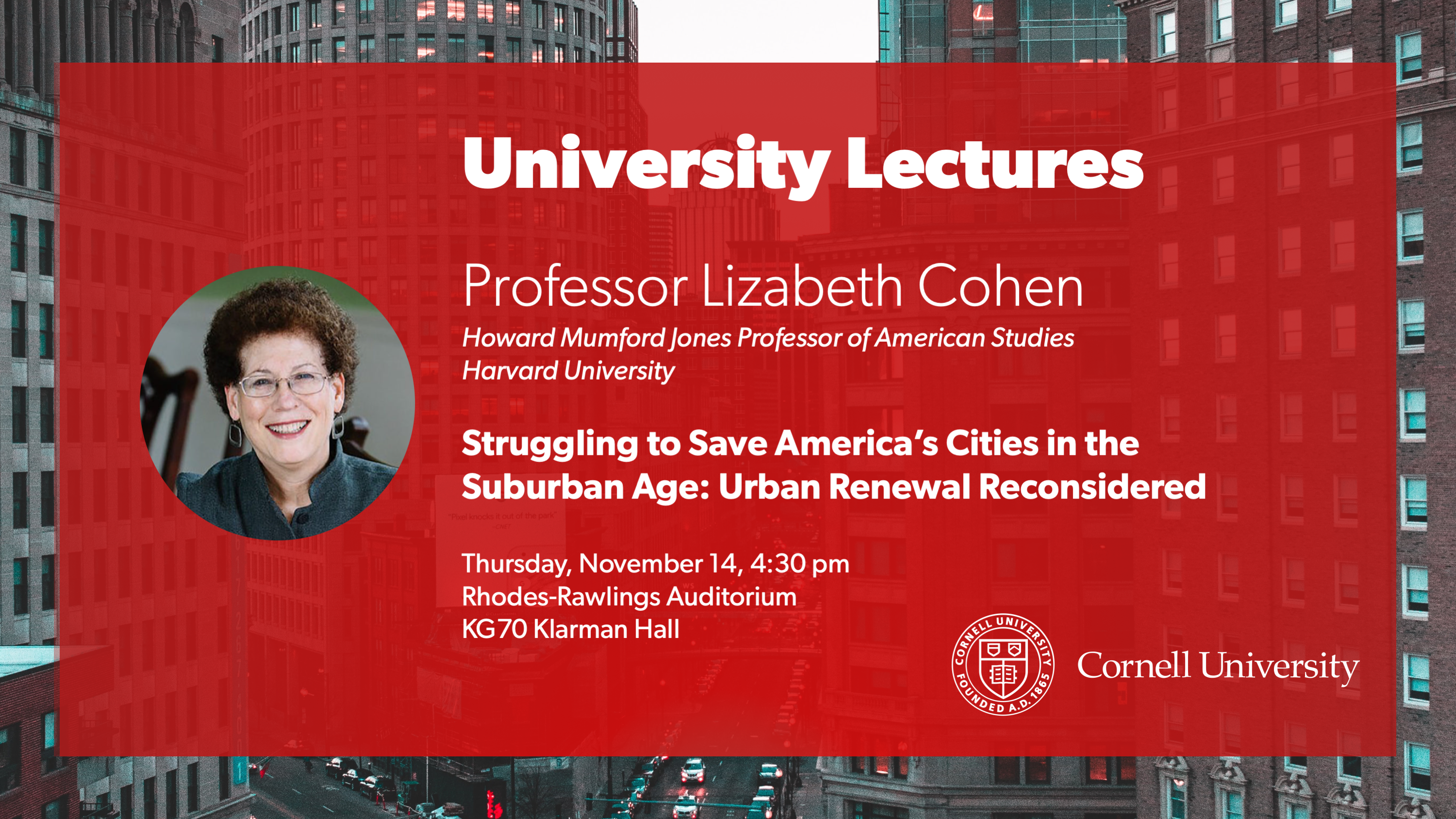 Struggling to Save America’s Cities in the Suburban Age: Urban Renewal Reconsidered

Unaffordable housing, economic inequality and aging infrastructure: Cities today are struggling. With limited tools to address these problems, city governments are often forced to rely on the private sector to support the public good. But it wasn’t always this way.

Harvard University historian Lizabeth Cohen will examine the role of government and private enterprise in renewing urban areas in a University Lecture, “Struggling to Save America’s Cities in the Suburban Age: Urban Renewal Reconsidered,” Nov. 14 at 4:30 p.m. in Rhodes-Rawlings Auditorium, Klarman Hall.

“This lecture will appeal to anyone who cares about the fate of American cities,” said Ray Jayawardhana, the Harold Tanner Dean of the College of Arts and Sciences. “Cohen’s deeply researched insights intersect with work being done by students and faculty in history, sociology, political science and American studies, and also holds interest for the public at large. Because of key collaborations, Cornell is a great venue to revisit questions of urban renewal in light of today’s challenges.”

Cohen’s historical research is more relevant today than ever, said J. Meejin Yoon, B.Arch. ’95, the Gale and Ira Drukier Dean of the College of Architecture, Art and Planning, which is collaborating on the University Lecture.

“It explores how past debates on the weighing of private interests against public good had a permanent imprint on our cities,” she said.

In her talk, Cohen will draw from the larger discussion of urban history and city health in her new book, “Saving America’s Cities: Ed Logue and the Struggle to Renew Urban America in the Suburban Age.” Logue, a Yale-trained lawyer, was instrumental in the revitalization of Boston and parts of New York state from the 1950s to the 1980s. His career tracked the shift from government-funded public programs after World War II to private interests later in the 20th century.

Cohen is the Howard Mumford Jones Professor of American Studies at Harvard and a Harvard University Distinguished Professor in the Department of History. She was the dean of the Radcliffe Institute for Advanced Study from 2011 to 2018. Her previous books include the Pulitzer Prize finalist “Making a New Deal: Industrial Workers in Chicago, 1919-1939” and “A Consumers’ Republic: The Politics of Mass Consumption in Postwar America.”

The lecture is sponsored by the Cornell University Lectures Committee and the College of Arts and Sciences, as well as the Departments of History and Government and the American Studies Program in A&S.