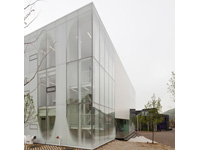 Jinhee Park and John Hong are the principals of SsD, an architectural firm with offices in New York City, Boston, and Seoul, South Korea. SsD approaches design as a convergent, interdisciplinary venture. Minimum form takes maximum effect with the goal to bridge the utopian and the pragmatic. Instead of separating aspects of architecture, landscape, history, social systems, and codes into their constituent disciplines, these agendas are simultaneously explored so that each discipline symbiotically gains from the other. In this way sustainability emerges as an integrated rather than additive result. SsD has been published in major media such as Metropolis, Dwell, Architectural Record, the New Yorker, and PBS. SsD has received many design awards including the AIA Young Architects Award, the Emerging Voices Award, the Young Architects Forum Award by the Architectural League of New York, the Holcim Foundation for Sustainable Construction Award, the Metropolis Next Generation Prize, and 10 AIA awards. They have lectured and exhibited at many universities and conferences including venues at Harvard GSD, Ohio State University, and Seoul National University, as well as at several national design conferences.

Jinhee Park received a master in architecture from Harvard GSD and a bachelor of fine arts in industrial design from Seoul National University. She is currently a design critic in architecture at the Harvard GSD. Previous appointments include the Morgenstern Chair Professor at the Illinois Institute of Technology, and the Sasaki Distinguished Visiting Critic at the Boston Architectural College. In addition she has taught an interdisciplinary industrial design/architecture studio as visiting associate professor at the University of Houston.