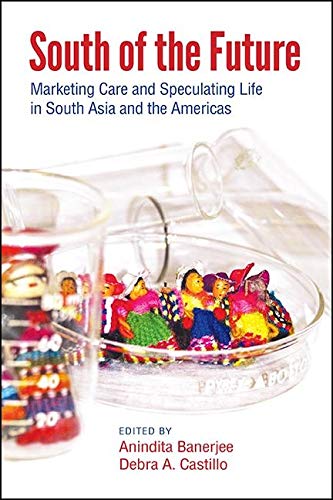 South of the Future: Marketing Care and Speculating Life in South Asia and the Americas, by Anindita Banerjee & Debra Castillo

South Asia and Latin America represent two epicenters of migrant care work and the globalized reproductive market. Yet scholars and the media continue to examine them in geographical and conceptual isolation. South of the Future closes both these gaps. It investigates nannying, elder care, domestic work, and other forms of migrant labor in the Americas together with the emerging “Wild West” of biotechnology and surrogacy in the Indian subcontinent. The volume is profoundly interdisciplinary and includes both prominent and emerging scholars from a wide variety of fields, including anthropology, law, literary and cultural studies, science and technology studies, and social policy. These contributors speak to the dynamic, continually changing facets of the nexus of care and value across these two key regions of the global south. By mobilizing specific locations and techno-economics and putting them into dialogue with one another, South of the Future rematerializes the gendered, racialized bodies that are far too often rendered invisible in structural analyses of the global south, or else are confined to particular geo- and biopolitical paradigms of emerging markets. Instead, these bodies occupy the center of a global, highly financialized economy of creating and sustaining life.

Debra A. Castillo is Stephen H. Weiss Presidential Fellow, Emerson Hinchliff Professor of Hispanic Studies, and Professor of Comparative Literature at Cornell University. She is past president of the international Latin American Studies Association. She specializes in contemporary narrative and performance from the Spanish-speaking world (including the United States), gender studies, comparative border studies, and cultural theory. Her most recent books include South of the Future: Speculative Biotechnologies and Care Markets in South Asia and Latin America (with Anindita Banerjee) and The Scholar as Human (with Anna Sims Bartel).