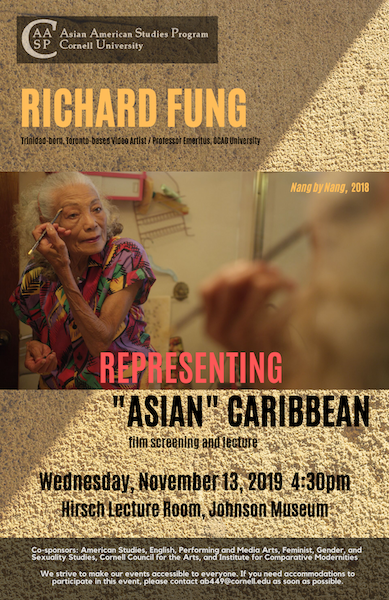 What problems and possibilities present themselves when we experience and think Trinidad and Tobago through the framework of the term “Asian”? Through his documentaries, Nang by Nang (2018) and Dal Puri Diaspora (2012), Trinidad-born and Toronto-based video artist Richard Fung ushers us into the material historical vortices of migration and colonialism that produce “Asian” Trinidad. Nang by Nang is a portrait of Fung’s cousin Nang (a woman who lived by her own script), while Dal Puri Diaspora retraces the recipe for Caribbean roti to tackle the history of Indian indentured labour.  The presentation will include a screening of Nang by Nang in its entirety, as well as clips from Dal Puri Diaspora.

Richard Fung is an artist and writer born in Trinidad and based in Toronto. He holds a diploma from the Ontario College of Art, a degree in cinema studies and an MEd in sociology and cultural studies, both from the University of Toronto. He is Professor in the Faculty of Art at OCAD University, teaching courses in Integrated Media and Art and Social Change.

His work comprises challenging videos on subjects ranging from the role of the Asian male in gay pornography to colonialism, immigration, racism, homophobia, AIDS, justice in Israel/Palestine, and his own family history. His single-channel and installation works, which include My Mother’s Place (1990), Sea in the Blood (2000), Jehad in Motion (2007), Dal Puri Diaspora (2012), and Re:Orientations (2016), have been widely screened and collected internationally, and have been broadcast in Canada, the United States and Trinidad and Tobago.

Richard’s essays have been published in many journals and anthologies, and he is the co-author with Monika Kin Gagnon of 13: Conversations on Art and Cultural Race Politics (2002), later updated and translated into French. He was a Rockefeller Fellow at New York University and has received the Bell Canada Award for Outstanding Achievement in Video Art and the Toronto Arts Award for Media Art. In 2015, he received the Kessler Award from CLAGS: Center for LGBTQ Studies at the City University of New York for “a substantive body of work that has had a significant influence on the field of LGBTQ Studies.

We strive to make our events accessible to everyone. If you need accommodations to participate in this event, please contact ab449@cornell.edu as soon as possible.