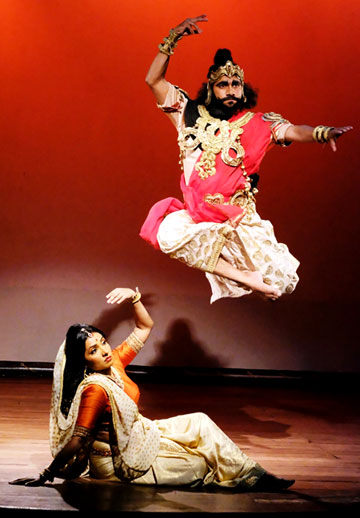 From popular songs, films, plays, television series, social media, “historical” narratives to the building of temples, Ravana—the villain in Valmiki’s Ramayana—has gained unprecedented popularity in twenty-first century Sri Lanka. In the current process of remaking an exclusively Sinhala (or Hela) Ravana, the Tamil literary and popular cultural portrayals of Ravana as a Dravidian King are entirely obliterated. Yet, Ravana has a long history in Sri Lankan Tamil literature and popular culture as well. Tracing the trajectories of the various manifestations of Ravana reveals the ways in which the Hela/Sinhala/Tamil hero has been reimagined and transcreated during significant socio-political transformations in Sri Lanka since the 1950s.

My intention in this paper is to analyze a select number of Ravana-related texts in Sri Lankan popular culture—literature, theatre, film—from the mid-twentieth to the twenty first century to examine the socio-political and economic workings of these retellings and to probe the way in which they render Ravana a hero in both Sinhala and Tamil literary, theatrical and cinematic texts and cultural contexts. I examine how ancient and modern myths, performances and performatives of Ravana are intertwined with ideologies of nationalism, neoliberalism and power and how the image of Ravana is in a process of continual transformation. To explore the transcreations and remakings of Ravana, I draw insights from Andre Lefevere’s concept of rewriting and from the work of postcolonial translation theorists A.K. Ramanujan and Heraldo de Campos.

Kanchuka Dharmasiri teaches in the Department of English at the University of Peradeniya, Sri Lanka and her research interests include postcolonial studies, translation studies, and contemporary performance. She has a Ph.D. in comparative literature from the University of Massachusetts-Amherst.  Her articles and chapters have appeared in various journals and books such as Translating Women: Different Voices and New Horizons (Routledge: 2017), Routledge Handbook of Asian Theatre (Routledge: 2016), and Mapping South Asia through Contemporary Theatre (Palgrave Macmillan: 2014). She is the editor of Streets Ahead with Haththotuwegama (Ravaya: 2013) Dharmasiri is also a theatre director and translator. She produced Subha, a transcreation of Rabindranath Tagore’s short story, “Subha” and has translated and directed Eugène Ionesco’s The Bald Soprano and Woody Allen’s God. Her most recent production is Nodutu Aes / Unseen Eyes (2018/19), a devised multi-media play based on Bertolt Brecht and Kumari Kumaragamage’s poetry.