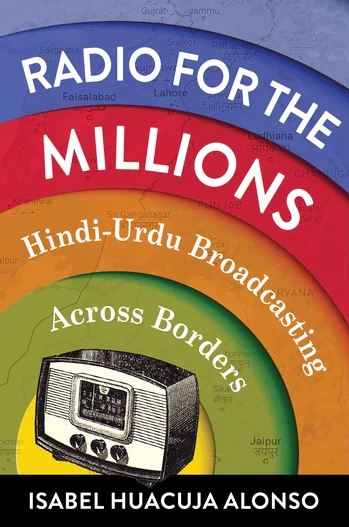 BOOK TALK: Radio for the Millions: Hindi-Urdu Broadcasting Across Borders

From news about World War II to the broadcasting of music from popular movies, radio played a crucial role in an increasingly divided South Asia for more than half a century. Radio for the Millions examines the history of Hindi-Urdu radio during the height of its popularity from the 1930s to the 1980s, showing how it created transnational communities of listeners.

Isabel Huacuja Alonso argues that despite British, Indian, and Pakistani politicians’ efforts to usurp the medium for state purposes, radio largely escaped their grasp. She demonstrates that the medium enabled listeners and broadcasters to resist the cultural, linguistic, and political agendas of the British colonial administration and the subsequent independent Indian and Pakistani governments. Rather than being merely a tool of nation-building in South Asia, radio created effective links that defied state agendas, policies, and borders. It forged an enduring transnational soundscape, even after the 1947 Partition had made a united India a political impossibility.

Huacuja Alonso traces how people engaged with radio across news, music, and drama broadcasts, arguing for a more expansive definition of what it means to listen. She develops the concept of “radio resonance” to understand how radio relied on circuits of oral communication such as rumor and gossip and to account for the affective bonds this “talk” created. By analyzing Hindi film-song radio programs, she demonstrates how radio spurred new ways of listening to the cinema. Drawing on a rich collection of sources, including newly recovered recordings, listeners’ letters to radio stations, original interviews with broadcasters, and archival documents from across three continents, Radio for the Millions rethinks assumptions about how the medium connects with audiences.

Isabel Huacuja Alonso is an assistant professor in the Department of MESAAS at Columbia University She is a historian of sound media and modern South Asia. Her publications have appeared in Public Culture, South Asia, and Bioscope.  Her book Radio for the Millions: Hindi-Urdu Broadcasting Across Borders is forthcoming with Columbia University Press. The book expands on her dissertation, which won the Sadar Patel 2016 Award for best dissertation on modern India in any discipline defended at a US institution. At Columbia, Dr. Huacuja Alonso teaches courses on South Asian history from an interdisciplinary perspective and on sound studies as well as Contemporary Civilization in the Core Curriculum. She completed her doctorate in history from The University of Texas at Austin and her BA in Economics at Cornell University.