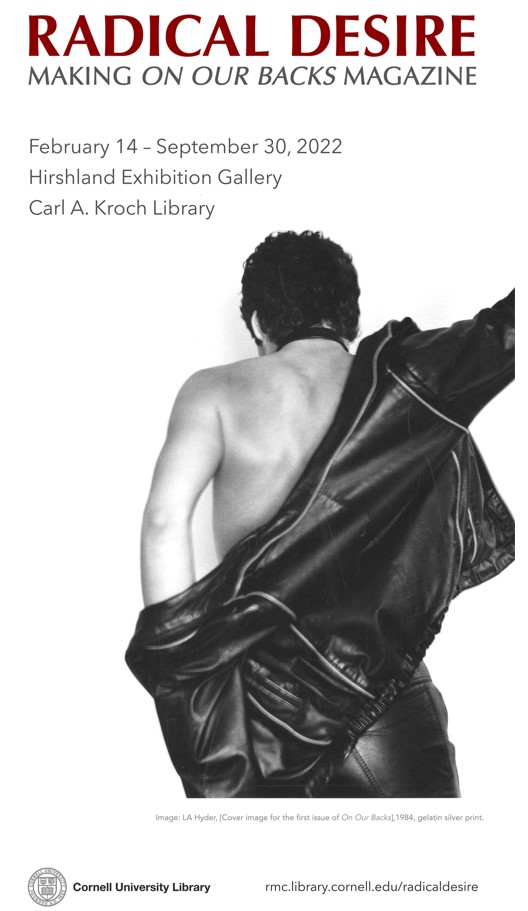 On Our Backs magazine launched in San Francisco in 1984 promising, per the tagline on the cover, “entertainment for the adventurous lesbian.” The photographic images on the cover and throughout were central to its mandate to deliver sexual content for lesbians. The photography also created the greatest difficulties for the magazine’s circulation at a moment when many feminist leaders decried pornographic photographs and film as a form of violence against women. This exhibition presents original photographs created for On Our Backs during its first decade. Made by staffers and freelancers, professionals and amateurs, members of the magazine’s inner circle and its far-flung readership, they convey the fantasies, imagination, humor, rigor, radicalism, political engagement, and ethos of community-building and inclusion that defined On Our Backs and made it a touchstone in the queer press. Additional photographs and documents elucidate the political and erotic contexts into which the magazine emerged, the women behind it, and their business practices and strategies. All materials are drawn from Cornell Library’s Human Sexuality Collection.

This exhibition was curated by Kate Addleman-Frankel, the Gary and Ellen Davis Curator of Photography at the Johnson, and Brenda J. Marston, Curator of the Human Sexuality Collection at Cornell University Library.