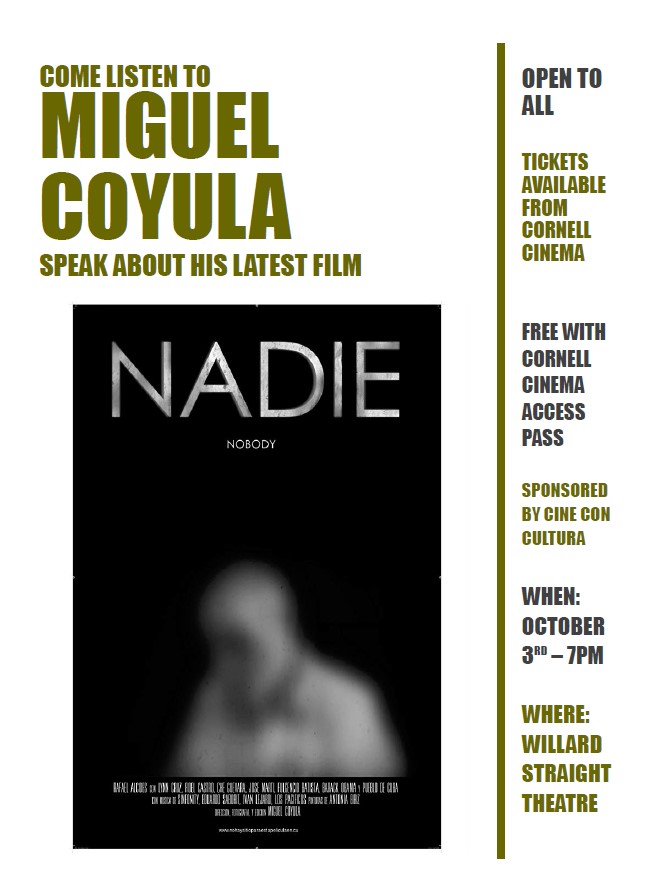 Please come and listen to Miguel Coyula --direct from Cuba -- speak about his film Nadie this Thursday at Cornell Cinema 7pm.

In 2009, Coyula was awarded the Guggenheim Fellowship by The John Simon Guggenheim Memorial Foundation for developing his second feature, the film, Memories of Overdevelopment,  a follow-up to the Cuban classic Memorias del subdesarrollo (1968), based on the novel by Cuban writer Edmundo Desnoes. Cornell had the pleasure of his visit in 2011.

He now returns with Nadie (2018), recently screened at MOMA, a film that the curator there describes as:

Nadie focuses on Rafael Alcides, once a widely known and celebrated writer of the Cuban revolution; now, a stranger in his own country, he tries desperately to save his unpublished novels before the ink literally fades from their pages. This is a story of love and deception in the Cuban revolution, as seen through the eyes of someone who was initially mesmerized by its possibilities. Director Miguel Coyula has created a pop-culture collage combining clips from old movies, photographs, and imaginary conversations, all held together by the magnetic personality of raconteur Alcides. It’s an exquisite journey though the mind of a poet who describes his world in all its raw brutality and beauty; one man’s final reckoning with the ideals of the Cuban Revolution—and his own life.

Please come and join us for a stimulating evening of film and dialogue.