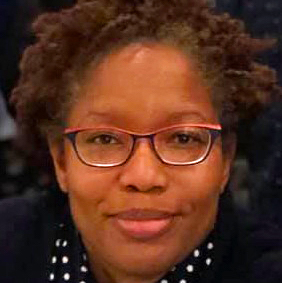 THIS EVENT HAS BEEN CANCELED (May be rescheduled)

In this talk, Stallings will discuss portions of her transdisciplinary funk studies project: Black Saeculum: An Erospatiography, which discusses the end of sex and gender as we know it through an experiment with forms of writing and film about sex and race: erotica, pornography, and academic writing on sex.

The first half of the new world order was spent heralding the biological/physiological realness/naturalness of sexuality, as well as accepting the cultural factors that denaturalize sex, gender, and society. This next quarter of human development and evolution needs to be spent theorizing its galactic/cosmic meaning: that is to speculate on how our theories of the universe and theories of sex are intertwined, how this knowledge might matter to new genres of the human not addressed in existing publics and counter publics.

Dr. L.H. Stallings is Chair and Professor of African American Studies at Georgetown University. Prior to Georgetown, she held appointments at the University of Maryland College-Park, Indiana University, and the University of Florida. Most recently, she is the author of A Dirty South Manifesto: Sexual Resistance and Imagination in the New South, an examination of the new sex wars in the U.S South, as well as a celebration of the decolonial, anti-racist, and transnational resistance movement countering them. Her first book, Mutha’ is Half a Word!: Intersections of Folklore, Vernacular, Myth, and Queerness in Black Female Culture, critically engages folklore and vernacular theory, black cultural studies, and queer theory to examine the representation of sexual desire in fiction, poetry, stand-up comedy, neo-soul, and hip-hop created by black women. She is also co-editor and contributing author to Word Hustle: Critical Essays and Reflections on the Works of Donald Goines, which offers a critical analysis of street literature and its most prolific author. Her second book, Funk the Erotic: Transaesthetics and Black Sexual Cultures, explores how black sexual cultures produce radical ideologies about labor, community, art, and sexuality. It has received the Alan Bray Memorial Award from the MLA GL/Q Caucus, the 2016 Emily Toth Award for Best Single Work by One or More Authors in Women’s Studies from the Popular Culture Studies Association/American Culture Association (PCA/ACA), and it was a 2016 Finalist for the 28th Annual Lambda Literary Awards for LGBTQ Studies.

This lecture is the latest in a series of talks focusing on current topics in African American literary studies, the African American Studies Speaker Series. Past speakers have included Hortense Spillers, Nahum Dimitri Chandler, GerShun Avilez, and Erica Edwards. The talks in the series are supported by the Department of English and College of Arts & Sciences.

Reception to follow in the Dining Room, A.D. White House

College of Arts & Sciences, English, Society for the Humanities

The venues are wheelchair accessible and equipped with assistive listening technology. If you need accommodations to participate in these events, please contact us as soon as possible.