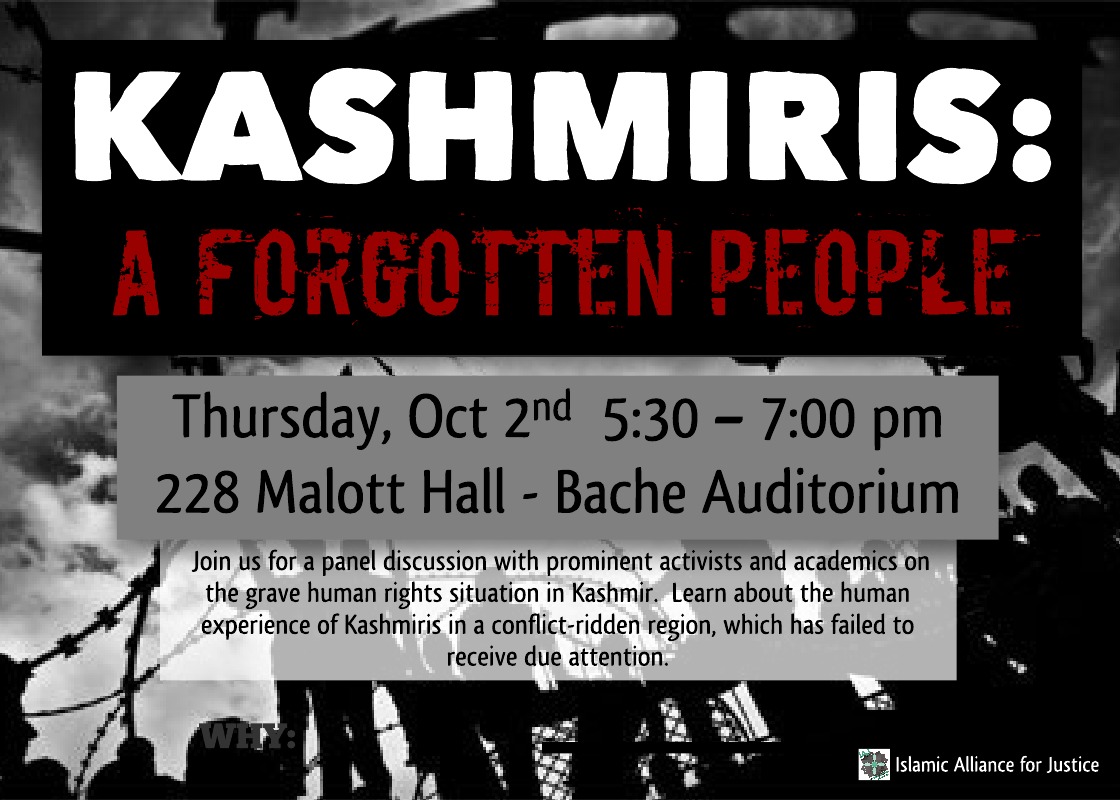 Kashmir - a conflicted state between Pakistan and India - has been the center of military and political battles since 1947. Beyond the politics and the national interests of the two countries, this panel discussion aims to go deeper into the black box and highlight the human experience of Kashmiris. Despite evidence of massive human rights abuses, the immense suffering of the civilian population has failed to receive due attention from political and activist circles as well as mainstream media. International organizations, including Amnesty International and the International Committee of the Red Cross, have documented numerous violations of fundamental rights, including mass killings, forced disappearances, political repression, torture and sexual abuse.

Join us for a panel discussion with prominent activists and academics on the grave human rights situation in Kashmir. Learn about the much-ignored human experience of Kashmiris in a conflict-ridden region of the world.

Edward Hasbrouck: Edward Hasbrouck is an award-winning travel journalist, author of the "Practical Nomad" series of travel how-to books, and longtime activist for peace, justice, and human rights in the US and around the world. Since visiting Kashmir in 1989, he has followed events in Kashmir, written about Kashmir in movement journals, and worked to raise awareness and understanding of Kashmir in the US. As an engaged observer from afar, Mr. Hasbrouck offers a holistic perspective that reframes the "the Kashmir question" in the context of contemporary geopolitical dynamics and activist concerns, both in the region and in the US.

Saiba Varma: Saiba Varma is a lecturing fellow at Duke University, having recently earned her Ph.D. in anthropology from Cornell. She has written extensively on anthropological aspects of the conflict in Kashmir as it is experienced by Kashmiris. Her research focuses on the mental health costs of the conflict and the emergence of medical and humanitarian initiatives in the region.

Ahmad Rafiqi: Ahmad Rafiqi is a Kashmiri-American Ph.D. student in Mathematics at Cornell University. Mr. Rafiqi was born in Srinagar, the capital of the Indian-administered Kashmir, where he spent the first 18 years of his life. From a young age, he participated in massive protests and marches against the Indian administration. An advocate for Kashmiri self-determination, he offers an important indigenous perspective based on personal experience.

Arnav Sahu: Arnav Sahu is a senior undergraduate student at Cornell University majoring in Economics. Mr. Sahu was born in New Delhi, the capital of India. Arnav has a keen interest in South Asian geo-politics and offers the Indian perspective on the issue.

Durba Ghosh: Durba Ghosh is an Associate Professor in the History Department at Cornell University. Her teaching and research interests focus on understanding the history of colonialism on the Indian subcontinent. Her current research focuses on popular and radical political movements in early and mid-twentieth century India as well as the role of political violence in popular historical narratives.

For disability accommodations (e.g., sign language interpreters, alternative formats), please contact Omar Khurshid at ok67@cornell.edu or at 6073199704 as soon as possible. Advance notice is necessary to arrange for some accessibility needs. Also please take note that there is a handicap parking area between Malott Hall and the Big Red Barn on the side of Bailey Hall and that there's also a primarily accessible entrance to Malott Hall from the Tower Road side. This entrance will be kept open after 4:30pm and until 7:30pm.