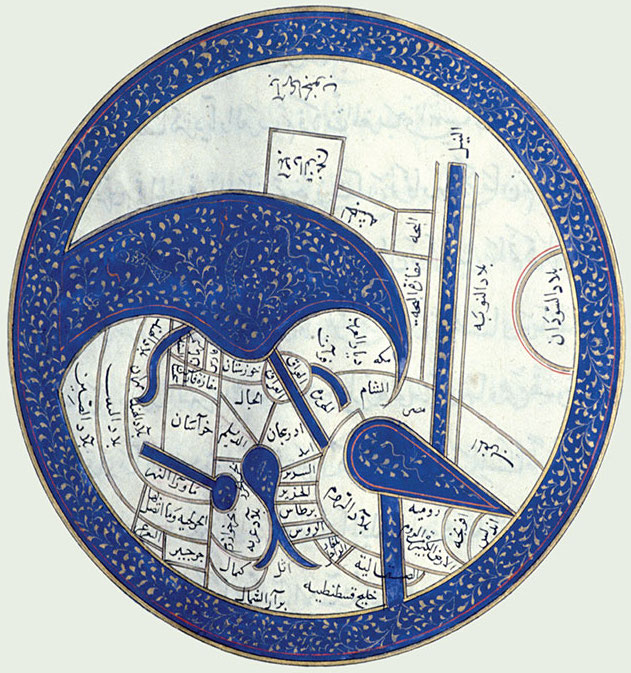 Karen Pinto has spent the last two decades studying medieval Islamic maps. These studies involved extensive on-site visits to manuscript libraries and provided the opportunity to collect thousands of images of medieval Islamic maps, ranging in date of origin from the eleventh to the nineteenth centuries. The sheer number of extant Islamic maps tells us that depictions of the world abounded in Muslim circles from the thirteenth century onwards when copies of these map-manuscripts began to proliferate. The world and 20 regional maps showing the Muslim caliphal empire in the Kitab al-Masalik wa al-Mamalik (Book of Roads and Kingdoms) tradition— the earliest known carto-geographical tradition—loomed large in the medieval Muslim imagination. It was pondered, discussed, and copied with major and minor variations again and again, and all with what seems to be a peculiar idiosyncrasy to modern eyes. The cartographers did not strive for mimesis (imitation of the real world). They did not show irregular coastlines even though some of the geographers, whose work includes these maps, published acknowledgement that the landmasses and their coastlines are uneven. They present instead a deliberately schematic layout of the world and the regions that comprised the Islamic empire in what can be best described as “cartoideographs.” Employing a range of digital tools ranging from an online encyclopedic database called MIME (Medieval Islamic Maps Encyclopedia) to geo-referencing and satellite-to-site identification, Karen Pinto specializes in analyzing the place, space, and artistic matrix underlying these maps to reveal their historical roots and the mentalité of the milieus within which they were conceived, copied, and promoted. Her talk will showcase the use of digital tools to reveal the vistas into medieval mapping that they make possible.

Karen Pinto is a native of Karachi, Pakistan. She received her Ph.D. from Columbia University. She has worked extensively with medieval Islamic maps in manuscript libraries around the world. Her book, Medieval Islamic Maps: An Exploration, was recently published by The University of Chicago Press, 2016. Her forthcoming books are “The Mediterranean in the Islamic Cartographic Imagination,” and “What is Islamic about Islamic Maps?” She is the recipient of a 2013-14 NEH fellowship. Her other publications include: “In God’s Eyes: In God’s Eyes: The Sacrality of the Seas in the Islamic Cartographic Vision,” (Espacio, Tiempo, y Forma, 2017); “Passion and Conflict: medieval Islamic views of the West," (Mapping Medieval Geographies, ed. Keith Lilley, Cambridge University Press, 2013); “Searchin’ his eyes, lookin’ for traces: Piri Reis’ World Map of 1513 & Its Islamic Iconographic Connections (A Reading Through Bağdat 334 and Proust),” (Journal of Ottoman Studies, 2012); "The Maps Are The Message: Mehmet II’s Patronage of an ‘Ottoman Cluster,’" (Imago Mundi, 2011); and numerous encyclopedia entries on Islamic cartography.

This talk is hosted by Quodlibet as part of the Terra Digita conference.