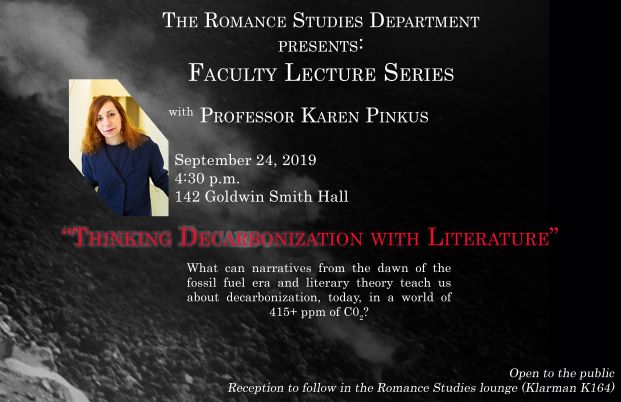 Only a few years ago, "geoengineering"--both the solar side and carbon dioxide removal or negative emissions technologies--was taboo, associated with a "moral hazard." Yet as various bodies consider pathways to keeping warming below 2 degrees, "geoengineering" is becoming mainstream. A common approach suggests that the technologies exist, and they simply need to be financed or scaled up. My talk takes seriously the probability that such technologies will be implemented, but rather than critique them on ethical grounds, as some humanists do, I attempt to think geoengineering through literature and literary theory. Drawing on texts from dawn of the fossil fuel era, I ask what narrative (as opposed to scenarios or "story telling" produced by industry) and language brought together can offer to a discussion of climate change mitigation, now, at the time of 415+ ppm of C02 concentration and in the future.

Karen Pinkus is Professor of Romance Studies and Comparative Literature at Cornell, where she is also editor of diacritics. She is author of numerous pioneering publications in environmental humanities, cultural studies, film and literary theory.

This is the first of a new series, the Romance Studies Faculty Lecture Series.