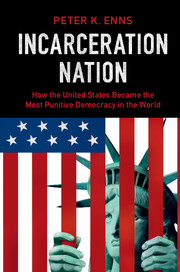 Incarceration Nation: How the United States Became the Most Punitive Democracy in the World

The rise of mass incarceration in the United States is one of the most critical outcomes of the last half-century.

Join us for a Chats in the Stacks book talk with author Peter K. Enns, associate professor in the Department of Government, and executive director of the Roper Center for Public Opinion Research at Cornell. His new book Incarceration Nation (Cambridge University Press; March 2016) offers a very compelling explanation of this outcome and helps us understand the forces that led the United States to becoming the world's leader in incarceration.

Enns’ new book combines in-depth analysis of Barry Goldwater and Richard Nixon's presidential campaigns with sixty years of data analysis, and reveals how politicians responded to an increasingly punitive public by pushing policy in a more punitive direction. He also argues that media coverage of rising crime rates helped fuel the public’s “tough on crime” outlook that led to a rapid rise in incarceration. Today, the public’s less punitive views have resulted in bipartisan calls for criminal justice reform.