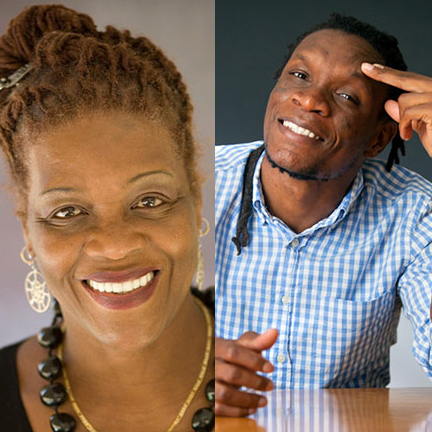 Professors Carole Boyce Davies and Ishion Hutchinson will engage in a wide-ranging conversation about their creative and scholarly work archiving the Caribbean experience during global conflicts.

Carole Boyce Davies is a professor of English and Africana Studies at Cornell University. She has held distinguished professorships at a number of institutions, including the Herskovits Professor of African Studies and Professor of Comparative Literary Studies and African American Studies at Northwestern University. She is the author of Black Women, Writing and Identity: Migrations of the Subject and Left of Karl Marx: The Political Life of Black Communist Claudia Jones. Her most recent monograph is Caribbean Spaces: Escape Routes from Twilight Zones and a children’s book, Walking.

Ishion Hutchinson was born in Port Antonio, Jamaica. He is the author of two poetry collections: Far District and House of Lords and Commons. He is the recipient of the Windham-Campbell Prize, the National Book Critics Circle Award for Poetry, a Guggenheim Fellowship, the Joseph Brodsky Rome Prize, the Whiting Writers Award, the PEN/Joyce Osterweil Award, and the American Academy of Arts and Letters Award in Literature, among others. He is a contributing editor to the literary journals The Common and Tongue: A Journal of Writing & Art.

In A Word is a series that showcases the Creative Writing Program’s influences and contributions to the literary world by its dedicated faculty of poets and fiction writers.

Reception to follow in the English Lounge, 258 Goldwin Smith Hall

The venue is wheelchair accessible and equipped with assistive listening technology. If you need additional accommodations to participate in this event, please contact us as soon as possible.