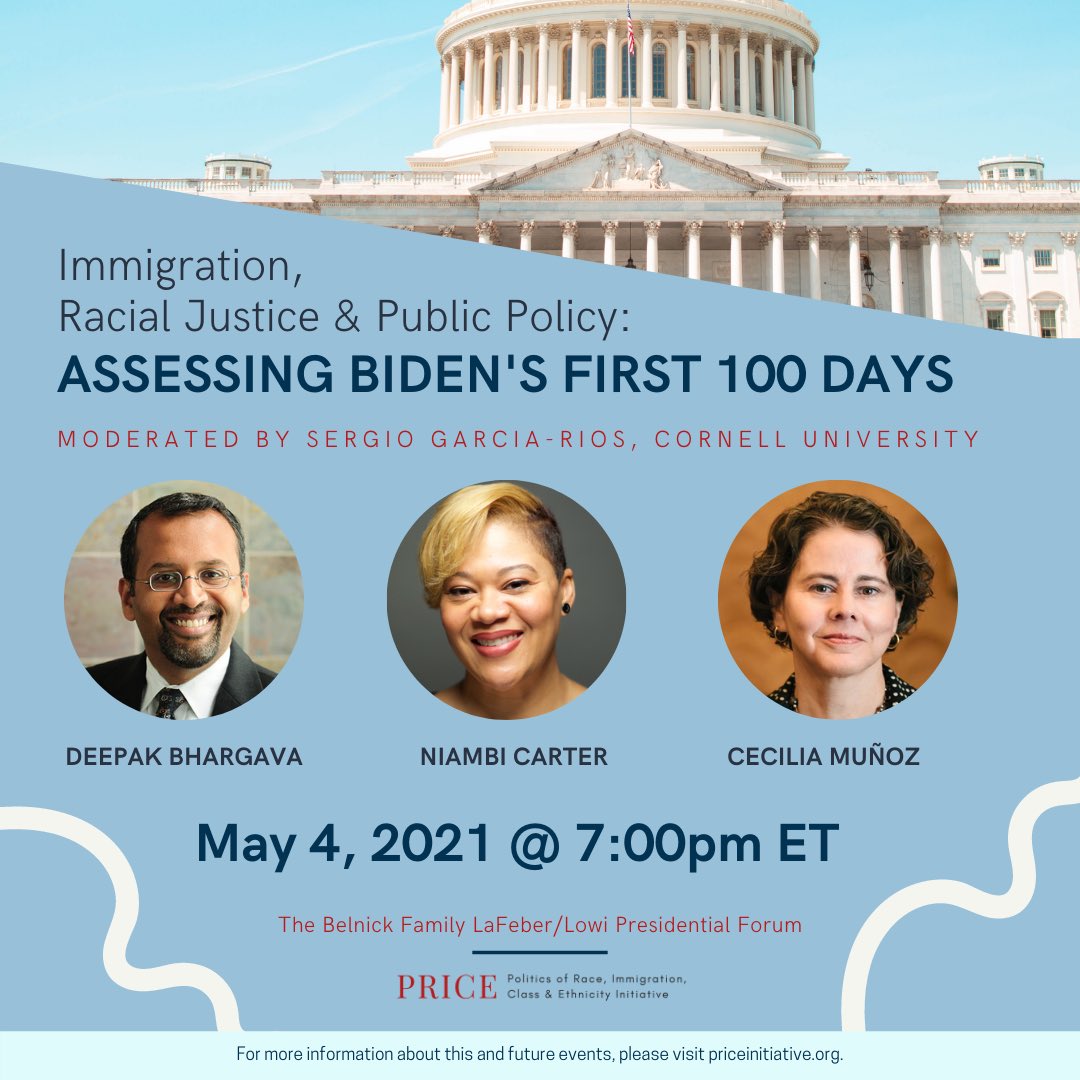 In this webinar, PRICE tackles some of the biggest and most pressing issues in U.S. politics. As we've moved into a new presidential administration, what has President Biden done (or failed to do) to advance racial justice? How has the administration addressed the dysfunctional and destructive U.S. immigration system? What does the first 100 days of the Biden Administration tell us about what is to come and about the trajectory of U.S. democracy?

This event is being organized as part of the Belnick Family LaFeber/Lowi Presidential Forum, which honors the teaching and scholarship of Professors Walter LaFeber and Theodore Lowi. It seeks to foster student engagement within American politics and supports programming around each U.S. presidential election to encourage public engagement with the core issues facing the United States and the world.

Deepak Bhargava is a Distinguished Lecturer of Urban Studies at CUNY. He is a policy expert on issues of poverty, economic justice, racial equity, and immigration. Prior to CUNY, he was President and Executive Director of Community Change and Community Change Action for 16 years. He has trained and mentored hundreds of leaders who play key roles in progressive organizations and social justice movements, and worked to establish important labor-community partnerships at the national level on issues such as immigration reform, health care, and fiscal policy.

Niambi Carter is an Associate Professor of Political Science at Howard University. She earned her Ph.D. in Political Science from Duke University, working primarily in the area of American Politics with a specific focus on Race and Ethnic Politics, Black Politics, Public Opinion, and Political Behavior. She is the author of American While Back: African Americans, Immigration. She is actively involved in other work that examines sanctuary cities, lynching and race in American politiics, and the political ideology of African American Republians.

Cecilia Muñoz is a national leader in public policy and public interest technology with nearly three decades of experience in the non-profit sector and eight years of service on President Obama’s senior team. She joined the think tank and civic innovation platform New America in 2017 as vice president. She returned as a senior advisor in early 2021 after taking leave to lead the domestic and economic policy team for the Biden/Harris Transition. In 2020, she published the award-winning More Than Ready: Be Strong and Be You… and Other Lessons for Women of Color on the Rise.

Sergio Garcia-Rios is an Assistant Professor in the Department of Government and Latino Studies at Cornell University. His research centers around the idea that immigrants develop portfolios of identities which are fluid, situational, and are used instrumentally. He also examines voter turnout, political participation, and public opinion, especially among Latino immigrants. Other academic interests include issues related to Latinos and the Voting Rights Act, border issues and border research, and the politics of Mexico.