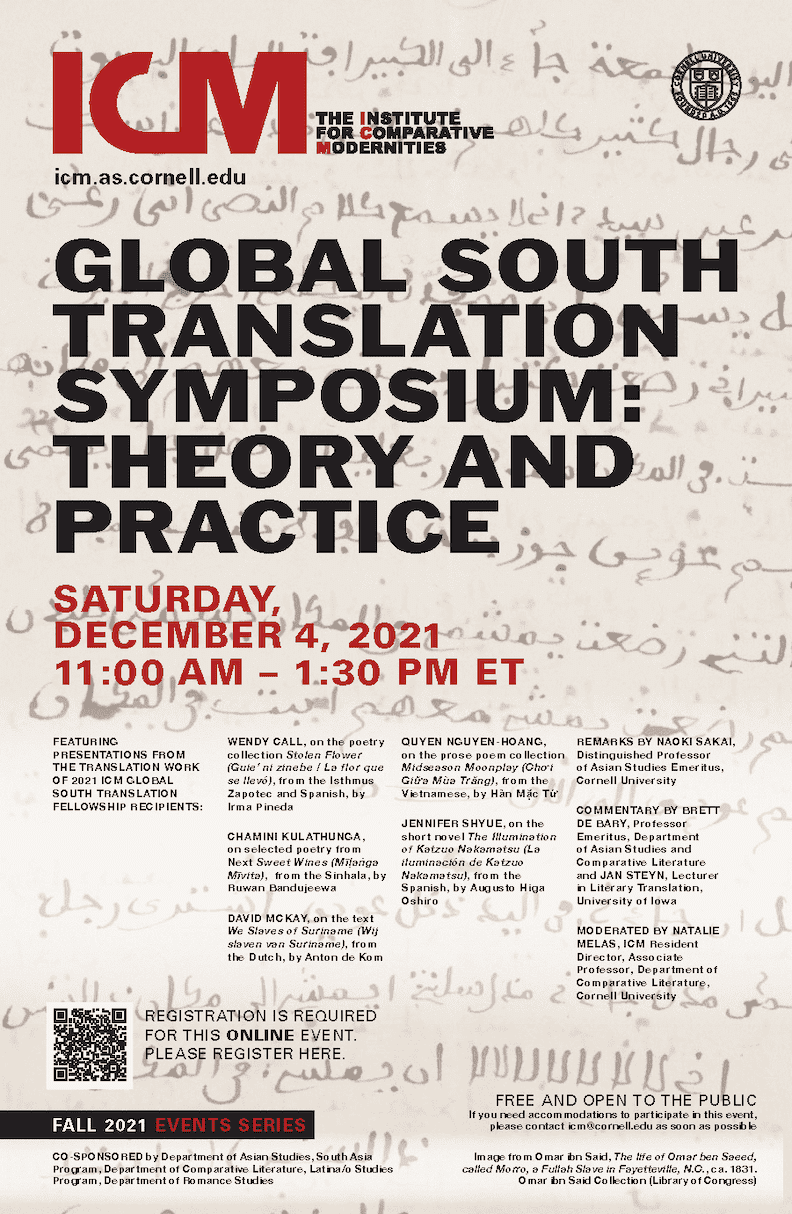 The Institute for Comparative Modernities' first Global South Translation Symposium, featuring presentations by our inaugural cohort of translators (see below), remarks by translation theorist Naoki Sakai and commentary by Brett DeBary and Jan Steyn.  Registation is required for this online event.  Registration link:

Guie’ ni zinebe / La flor que se llevó (Stolen Flower) is a collection of 45 poems by Irma Pineda, originally published in 2013 in a bilingual Isthmus Zapote/Spanish edition.  Selected poems have been published in three languages in The Chicago Review.  The collection explores gender-based violence against Indigenous communities, through multiple poetic voices.  The author, Irma Pineda, is a spokesperson for the rights and autonomy of Indigenous Peoples, as well as for the families of disappeared persons.

The work of contemporary Sri Lankan poet Ruwan Bandujeewa is highly acclaimed, particularly as writing that addresses class inequity, and describes the harsh realities groups living on the economic margins of an exploitative capitalist system.  His popularity in Sri Lanka uniquely cuts across class boundaries. The poems in this collection comprise a selection of his most celebrated writing, as well as unpublished work.

David McKay, on the text We Slaves of Suriname (Wij slaven van Suriname), from the Dutch, by Anton de Kom

Wij slaven van Suriname (We Slaves of Suriname), is a classic anti-colonial work first published in 1934, but never published in English until David McKay’s translation. The author, Anton de Kom, was an Afro-Surinamese writer and left-wing political organizer who later lost his life resisting the German occupation of the Netherlands in World War II.  De Kom’s historiographical book has been compared to the work of American authors such as W.E.B. Du Bois and to the anti-colonial writings of Frantz Fanon. In the Caribbean context, historians have likened We Slaves of Suriname to groundbreaking studies such as Capitalism and Slavery by Eric Williams and The Black Jacobins by C.L.R. James.

Hàn Mặc Tử  is a symbolist inspired major modern Vietnamese poet as yet untranslated into English.  Midseason Moonplay, published posthumously in Vietnam in 1941 is a wildly experimental and virtuosic series of prose-poems that expands the canon of Vietnamese literature.  Quyen Nguyen-Hoang writes that his work “stands apart from the stereotypical body of poetry that encloses Vietnam as a country attached to the US-Vietnam war legacies or a nation under the yoke of colonization and oppressive regimes.”

Augusto Hiro Oshiro is a contemporary Peruvian writer born to immigrants from Okinawa.  His short novels are considered vital and mesmerizing, some of the best contemporary writing in Spanish. This 2008 short novel La iluminación de Katzuo Nakamatsu invokes the complexities of Japanese-Peruvian histories, and exemplifies the writer at the height of his powers.

If you need accommodations to participate in this event, please contact icm@cornell.edu as soon as possible.