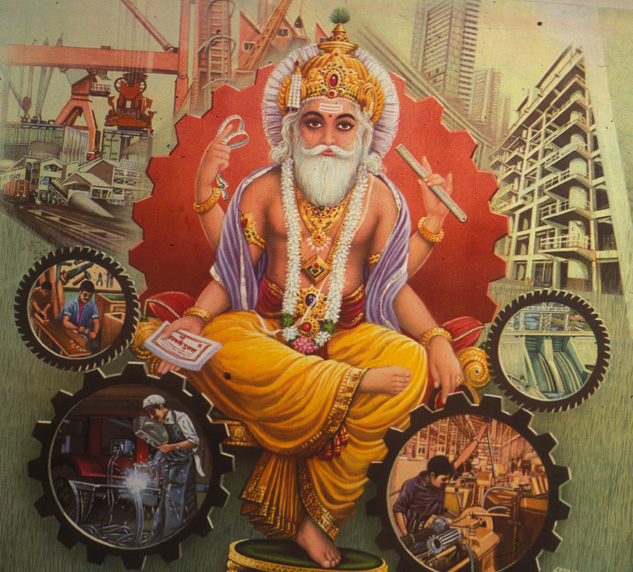 God in the Workshop: Some Ethnographic and Historical Notes on Vishwakarma Worship in India, by Ken George

The demiurgic figure of Vishwakarma in the Vedic, Buddhist, and Brahminical Hindu traditions of pre-industrial India was associated with artisanal modalities of ingenuity and technicity.  The increasingly public visibility of Vishwakarma worship across India since 1900 has shown unmistakable ties to the rise of industrial capitalism in that country.  The god has moved beyond craft workshops and into workplaces key to the country’s infrastructural systems and networks: factories, engineering schools, design studios, public works departments, and industrial parks.  Writing in the first decade of the 20th century, Ananda K. Coomaraswamy summoned the figure of Vishwakarma as the god of artisanal inspiration, a deity who could be set in opposition to machine-age capitalism.  Almost a century later, scholars of industrialized West Bengal who ran into the god on the factory floor would conjure Vishwakarma as a deified expression of peasant culture or working-class consciousness.  In these historical and ethnographic accounts, the god appears as a residual or renascent figure from an earlier ethico-political order.  A different story may be told, nonetheless, about the theophany of Vishwakarma in India’s industrial workplace.  The figure of Vishwakarma is also a technophany, a deity in whom technical consciousness and the social relations of humans and non-humans in the technical ensembles of today’s factories, refineries, and fabrication shops are made visible to devotional publics and counter-publics in the Hindu fold.  The aim of this paper, then, is to rethink the historical and socio-theological warrant for the god’s techno-ideological location in disciplinary literatures, in shrines, and on the factory floor.

Ken George (Ph.D., Michigan) is Professor of Anthropology in the ANU College of Asia and the Pacific at the Australian National University, having served previously at the University of Wisconsin-Madison, Harvard University, and as Editor of the Journal of Asian Studies (2005-2008).  Ken’s ethnographic and art historical research in Asia began with a decade of work on the cultural politics of ritual violence in highland Sulawesi, Indonesia.  He subsequently conducted a long-term collaborative project on contemporary Islamic art and art publics across Southeast Asia.  His research has been supported by the SSRC, the NEH, the Wenner-Gren Foundation, the Aga Khan Trust for Culture, the John Simon Guggenheim Foundation, and the Institute for Advanced Study, Princeton.  Ken’s books include the prize-winning Showing Signs of Violence: The Cultural Politics of a Twentieth Century Headhunting Ritual (1996); Spirited Politics: Religion and Public Life in Contemporary Southeast Asia (2005, co-edited with Andrew Willford); and Picturing Islam: Art and Ethics in a Muslim Lifeworld (2010).  His current research with Kirin Narayan has been supported by the American Institute of Indian Studies, the USIEF Fulbright Program, and an Australian Research Council Discovery Project Award. Together they are exploring the intermingling of religion, artisanship, image, ethics, and technology in India.  Ken is also gathering materials for a book on the theopolitics of art and technology in object-oriented lifeworlds and public spheres.