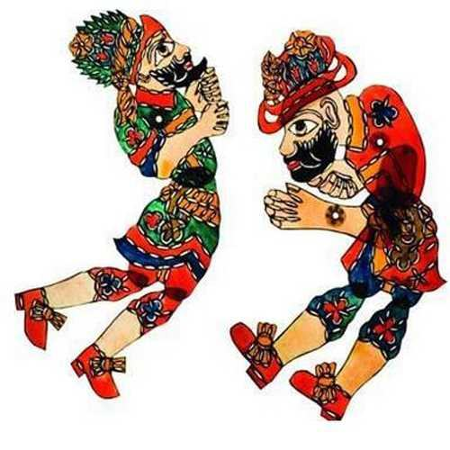 CANCELLED The Forest of the Witch

Due to the closure of Cornell University for the remainder of the semester, this event has been cancelled. We hope to reshedule for a future date.

Karagöz is a form of shadow theatre in Turkey, dating back nearly 700 years, in which figures known as ''tasvirs'' made of camel or ox hide in the shape of people or things are held on rods in front of a light source to cast their shadows onto a cotton screen.

A play begins with the projection of an introductory figure to set the scene and suggest the themes of the drama, before it vanishes to the shrill sound of a whistle, giving way to a main performance that may incorporate singing, tambourine music, poetry, myth, tongue-twisters and riddles. The usually comic stories feature the main characters Karagöz and Hacivat and a host of others. The puppets are manipulated by one artist. Karagöz was added to the UNESCO Intangible Cultural Heritage list in 2009.

Ayhan Hulagu founded the Karagoz Theatre Company in the U.S. in 2017 and made history as the first artist to introduce Karagöz to Broadway in January, 2020.

“The Forest of the Witch” was adapted by Hulagu from a play originally created by Muhittin Sevilen, an early 20th century Turkish puppeteer known for his humor and imagination, and includes the traditional main characters, Karagoz and Hacivat.

Department of Theatre, Film and Dance, Near Eastern Studies, Department of Performing and Media Arts, Society for the Humanities, Asian Studies

If you need assistance to participate in this event, please contact Ayla as soon as possible.