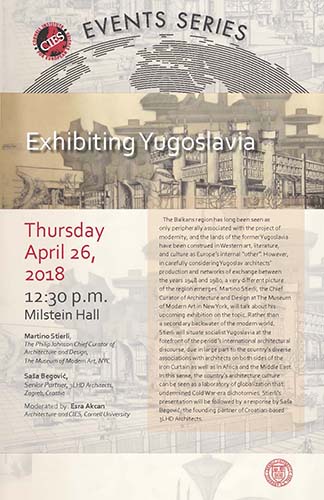 The Balkans region has long been seen as only peripherally associated with the project of modernity, and the lands of the former Yugoslavia have been construed in Western art, literature, and culture as Europe’s internal “other”. However, in carefully considering Yugoslav architects’ production and networks of exchange between the years 1948 and 1980, a very different picture of the region emerges. Martino Stierli, the Chief Curator of Architecture and Design at The Museum of Modern Art in New York, will talk about his upcoming exhibition on the topic. Rather than a secondary backwater of the modern world, Stierli will situate socialist Yugoslavia at the forefront of the period’s international architectural discourse, due in large part to the country’s diverse associations with architects on both sides of the Iron Curtain as well as in Africa and the Middle East. In this sense, the country’s architectural culture can be seen as a laboratory of globalization that undermined Cold War-era dichotomies. Stierli’s presentation will be followed by a response by Saša Begović, the founding partner of Croatian-based 3LHD Architects.

Refreshments will be served at noon.