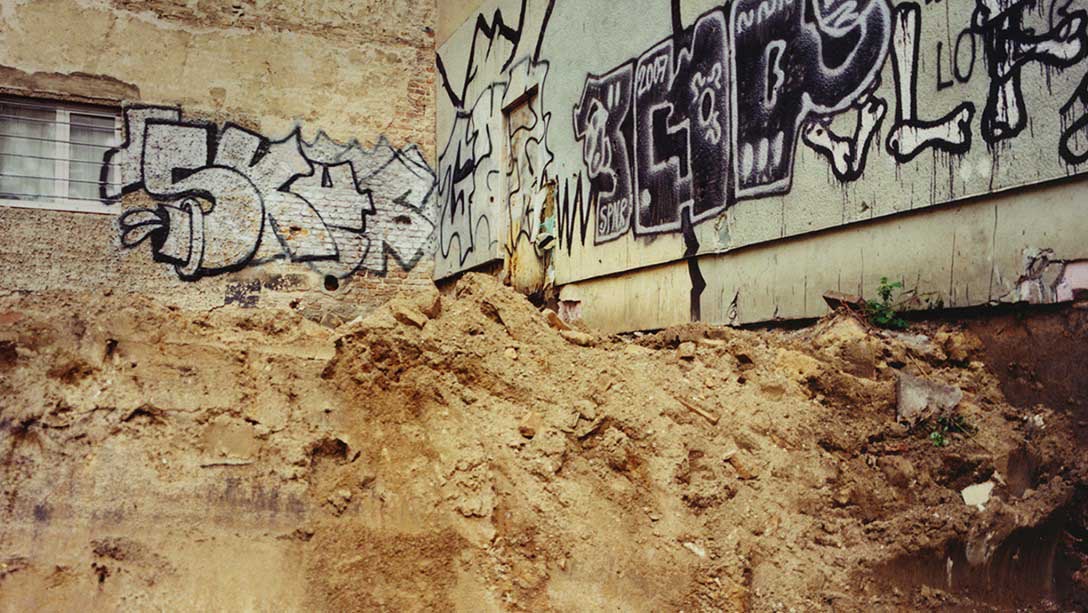 With the exhibition SOIL SOUL by the artists Ella Ziegler and Abrie Fourie, Cornell University expands the cross-disciplinary inquiry into forward-looking art-science collaborations. Poetic reflection and scientific speculation about our environment through installation, interventions, and photography. Soils house the most extensive biodiversity on the planet and, at the same time, are endangered by desertification and contamination.

Soil is connected to creation stories in many belief systems. Indigenous people connect to the soil as a sacred element and medium, which incorporates spirits and energies. The survival of civilizations has always (and still are!) related to soil health and its destruction. At the center of the proposed exhibition project lies the relationship of language, poetry, and memory of soil-scapes and how we may connect to this extraordinary territory. Soils build but also clash with civilization in the photography of Abrie Fourie. Fourie's photographs document and detect the layers of urbanization and civilization in daily life situations. Ella Ziegler poses questions about the human inability to sense and recognizing.

The project is funded by the Cornell Atkinson Center for Sustainability and the Berlin Senate Department for Culture and Europe.
Bio:
Abrie Fourie (1969) was born in Pretoria, South Africa. He presently divides his time between Richmond, Northern Cape, South Africa, and Berlin, Germany. Fourie bases his practice largely on photography but also participates in teaching, publishing, and curatorial projects. Since 2005 he has been the codirector, curator, and facilitator for Modern Art Projects South Africa. While lecturing at the Tshwane University of Technology, Pretoria, South Africa (1993–2007), he established "outlet" (2002–2007), an experimental exhibition space. Curatorial projects included Mine, a traveling exhibition of South African video art shown internationally in Dubai, United Arab Emirates; Bayreuth, Germany; and Johannesburg, South Africa. The Tate Modern London staged a revised version of Mine, titled The Film Will Always Be You: South African Artists On Screen, as part of SA-UK Seasons (2014–2015).

Ella Ziegler creatively transforms mundane existence into exciting opportunities for playful artistic expression using various creative methods. Her interdisciplinary observations and reflections lead us through different social situations. She highlights, questions, and renegotiates the importance of individual participation in public space through context-based actions and performances. Ziegler's ephemeral interventions often go quietly unnoticed but fortunately lives a second life in documentaries, exhibitions, lectures, and publications. She takes delight in renewing her own and her viewers' consciousness by highlighting and sensitizing us to what passes us typically by inconspicuously. Ziegler's independent, idiosyncratic practice is radical and straightforward at the same time, inspiring wonder, provoking curiosity, and making us think differently about what we previously considered ordinary.

She has participated successfully in international exhibitions, residencies, and projects, and she has received numerous awards and recognition for her work. Ziegler has taught in Switzerland and South Africa and as a Professor at Kunsthochschule Kassel, a college of fine arts in Kassel, Germany. In addition to her teaching activities, she initiated and curated the interdisciplinary series Salon Universitas - Art & Science Conversations at the Art Academy Kassel / the University of Kassel.

Masks must be worn at all times while in the Tjaden and Experimental Galleries.