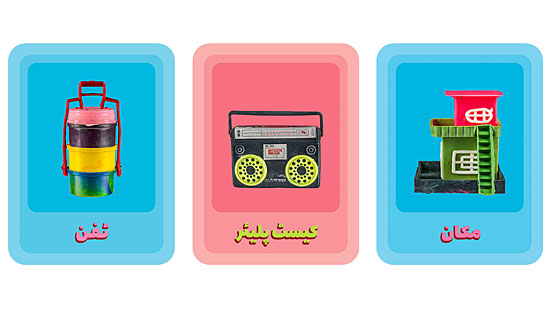 tilism: talisman; an inanimate object transformed into its own world

Tilism is a series of large-format photographs of tiny plastic toys, scaled up to 30X, that reveal the objects' unusual materiality — marbled plastic, strange fluorescent colors, and irregular form. The objects are machine-molded but appear uncannily to be handmade, rendering uncertain the division between the craft object and the industrially manufactured commodity. Created in small workshops in the informal sector of the megacity of Karachi, they use inexpensive recycled plastic granules to which new colors have been added. The irregular molds have been used far beyond their capacity for reproductive fidelity, and they are freely and multiply repurposed from previous iterations or existing objects. Their branding and origin are either missing or a mystery — a tilism — that points to discrepant dimensions beyond bourgeois life.

In a standard macro photograph, much of a 3D object is rendered out-of-focus due to a shallow depth of field. But here, each photograph is digitally stacked combining 20 or more separately focused exposures into a single final image, resulting in uniform sharpness across the whole object. The original scale is rendered uncertain, collapsing the distinction between the miniature and the life-size. The photographs are presented surface-bonded with acrylic, creating a high-gloss finish reminiscent of slick advertising of high-end branded commodities. By phenomenologically dwelling with these humble objects represented at a much higher aesthetic register, the viewer is invited to reflect on the relationship between material aesthetics and the lifeworlds this evokes.

Globalization is often understood as a process in which transnational brands replace local products. But this view overlooks its shadows — the largely invisible processes of labor, production, and consumption that transpire in the vast informality of the Global South. This is a realm of superexploitation, but also one of immense productive capacities, in which branding and intellectual property regimes are constantly challenged by those who seek to fashion a world from affordable materials and designs they find at hand or create anew.