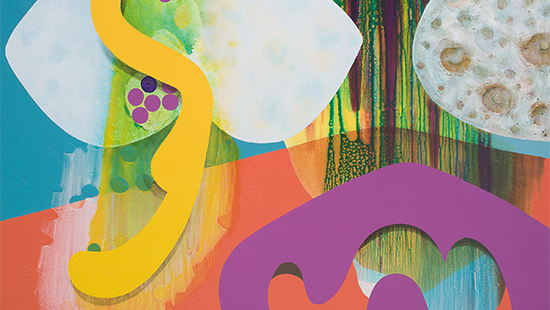 Carrie Moyer is a painter and writer. Moyer has been showing her work in the U.S. and Europe for more than 20 years. Her paintings were included in the 2017 Whitney Biennial. Moyer was the subject of two solo museum exhibitions, Carrie Moyer: Pirate Jenny, Tang Museum in Saratoga Springs in 2013; and Carrie Moyer: Interstellar, Worcester Museum of Art, in Massachusetts in 2012. From 1991–2008, Moyer and photographer Sue Schaffner collaborated as Dyke Action Machine!, a public art project that humorously dissected mainstream advertising through the insertion of lesbian imagery. Moyer's writing has appeared in Art in America, Artforum, and the Brooklyn Rail among others, and monographs on Louise Fishman and Nancy Grossman. She has received awards from the Guggenheim and Joan Mitchell foundations, Anonymous Was a Woman, and Creative Capital, among others. Moyer attended the Pratt Institute for her B.F.A., Milton Avery Graduate School of the Arts, Bard College for her M.F.A., and the Skowhegan School of Art. She is a professor and the director of the M.F.A. program in studio art at Hunter College. Moyer is represented by DC Moore Gallery in New York City.

The DC Moore Gallery describes Moyer's work in this way: "Overflowing with the seductions and materiality of color and paint, Moyer's latest work rejects the relentlessly dour focus of the zeitgeist, proposing instead a kaleidoscopic worldview that embraces the sensual as much the rational. Playful logo-like silhouettes — spores, flora, fauna, body-parts, vessels, towers, portals, planets, and asteroids — utilize a collapsed history of signs. These flattened archetypes and cheeky references often perform as compositional rigging around which cascades of paint, glitter, and light flow. A reaffirmation of the artist's Pleasure Principle, Moyer's recent paintings provide joyful sustenance to those on the barricades."