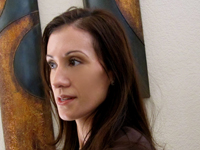 Retinitis pigmentosa (RP) is a group of inherited degenerative eye diseases characterized by mutations in the genetic structure of the photoreceptors that leads to the premature death of both rod and cone photoreceptors. Defects in particular genes encoding proteins that are involved in the photoreceptor structure, phototransduction cascades, or visual cycle are expressed in the rods but ultimately affect both types of cells. RP is “typically” manifested by a steady death of rods followed by a period of stability in which cones survive initially and then inevitably die too. In some RP cases, rods and cones die off simultaneously or even cone death precedes rod death (reverse RP). The mechanisms and factors involved in the development of the different types of RP are not well understood nor have researchers been able to provide more than a limited number of short-term therapies.

In this talk I will give an introduction of the relevant physiology of the eye as it pertains to RP and highlight some of the leading work in this area as well as existing mathematical models, including some of our work. In this research, we trace the progression of RP to complete blindness through each subtype via bifurcation theory. We show that the evolution of RP from one stage to another often requires the failure of multiple components. Our results indicate that a delicate balance between the availability of nutrients and the rates of shedding and renewal of photoreceptors is needed at every stage of RP to halt its progression. This work provides a framework for future physiological investigations potentially leading to long-term targeted multi-facet interventions and therapies dependent on the particular stage and subtype of RP under consideration. The results of this mathematical model may also give insight into the progression of many other degenerative eye diseases involving genetic mutations or secondary photoreceptor death and potential ways to circumvent these diseases.