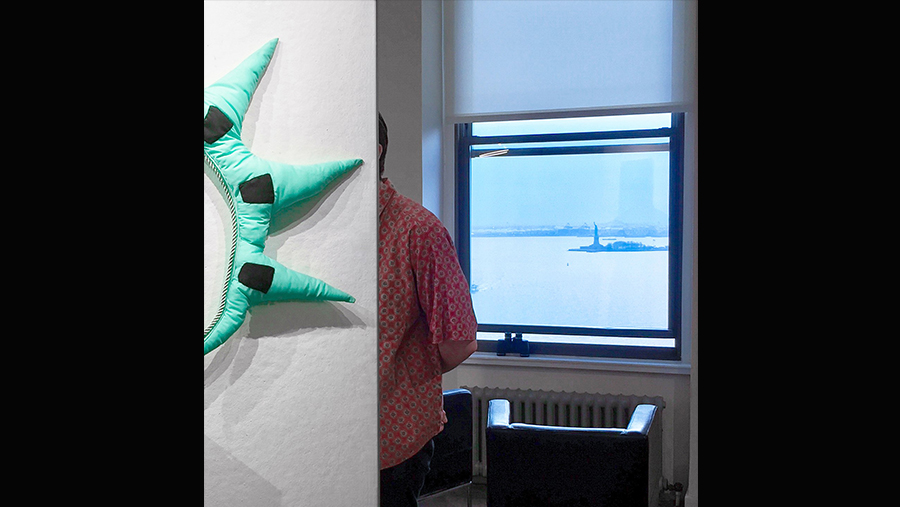 Mother of Exiles is a project conceived around work produced by the B.F.A. students attending AAP NYC during the spring 2020 semester. It is a web-based exhibition featuring the art of eleven art students dispersed mid-semester from their AAP NYC semester by the coronavirus to points north, south, east, and west. Organized as a website, the site launched on May 21, 2020, up through April 21, 2021.

The exhibition title — initially conceived for a first show on-site at the AAP NYC studios located at 26 Broadway, New York City — here serves to describe the arc of the students' shifting sites and moods as they continued to produce remarkable art from their homes, in isolation.

The show is organized in four movements, or chapters, which loosely convey a metamorphosis from the in-situ Mother of Exiles installation, with its activist impulses and shared experiences of the city, to work dispatched from the disparate geographic and emotional states in which each student found themselves in their "self-isolation."

The sections comprise 1. "26 B'way," the AAP NYC address; 2. "Merrick, Argyle, New York City, Ithaca, Yack, Houston, Detroit, Park City," a list of the cities in which each student "sheltered in place;" 3. "Inside, Under, Closer," a section whose art moves to inward, interior spaces and mindsets; and 4. "Back Out," which returns to the original Mother of Exiles installation and to the mix of emotions aroused by the spectacular views of 26 Broadway and the already distant thrills of simply being in the city.