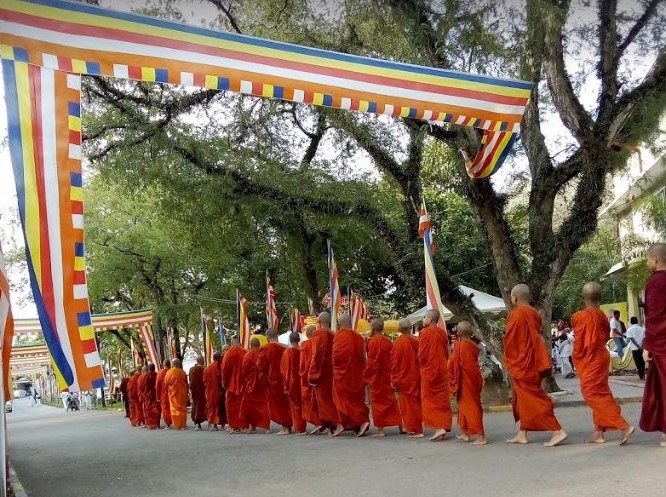 Whose Force is Violence? Sangha Sovereign and Authority of the Tradition, by Geethika Dharmasinghe

This paper is an attempt to understand how, what counts as “violence,” and what does not, emerges in a given society. Groups in post-1990s Sri Lanka, particularly those led by monks, engage in and authorize a “new” monastic discourse in which they demand state sovereign power. These groups and their political actions – hunger strikes, protests, and hostility towards minority communities, especially Muslims – are able to disable the state order. However, these acts are rarely considered “violent” by the majority of Sinhalese Buddhists. In this paper, Dharmasinghe analyzes how the actions of some monks come to be interpreted or glossed as not-violence in the Sinhala Buddhist majoritarian tradition in Sri Lanka. It is her contention that the Sinhala Buddhist tradition serves as a legitimizing frame for the monks' authority as a force in Sri Lanka. Dharmasinghe's ethnographic materials are gathered from Sri Lanka, but she argues that this work’s relevance goes beyond places where the Theravada Buddhist tradition triumphs.

Geethika Dharmasinghe, is a PhD candidate in the Department of Asian Studies at Cornell University. With the support of the Wenner-Gren Foundation, Dharmasinghe finished her field work in Sri Lanka in 2019. The larger question that hovers over her dissertation concerns the relationship of “Buddhists” to “violence.” It examines the conditions of possibilities for the emergence of Buddhist violence located outside of state control yet indebted to post-colonial avowedly secular electoral procedures, claiming premodern precedent for activities supported by a neo-liberal economic order. .