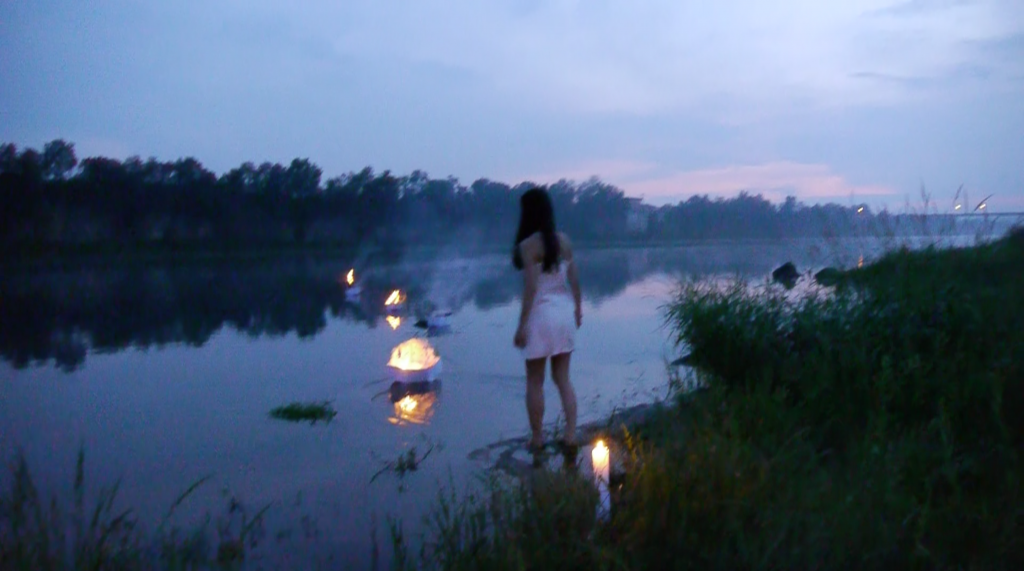 Cancelled. Postponing to September due to COVID-19 situation.

Multimedia artist Soni Kum will perform new work at Cornell, coming off the back of a recent project interviewing North Korean migrants in Osaka, Japan. Kum is a video and performance artist who grew up as a member of the North Korean community in Japan and her work spans the “nuclear Pacific,” linking North Korea, Japan, the US, and the Marshall Islands, along with other topics such as traditional Korean shamanism. Her work is an intellectually engaged effort to bridge the border between the living the dead, and to, as she puts it, shed light on “darkened pieces of history” in order to heal.

This is a rare chance to see one of the most important performance artists working today, and will be of especial interest to those working on issues of migrants, diaspora, performance, cultural memory, and trauma studies, as well as those working in the region of East Asia and the Pacific Rim. Kum is a long-time friend of Cornell, contributing both performance and essays as part of the book project Still Hear the Wound, a collection of critical writings on postcolonial feminist art in East Asia published by the Cornell East Asia Program in 2015. Kum is being brought to Cornell as part of the larger conference “Writing/Borders: Literature, translation, and East Asia” to be held Aril 17th and 18th, 2020.

The event will be moderated and chaired by Renate Ferro from the department of Architecture, Art, and Planning. Ferro works in the areas of emerging technology and culture, and runs a lab for research and emerging technology, The Tinker Factory.

Soni Kum is an interdisciplinary artist born in Tokyo as a third-generation Korean, working in film, installation, performance, photography, writing, and dance. Kum is a zainichi Korean, meaning she is part of a population of Koreans who came to mainland Japan during the Japanese Empire and prior to the division of the Korean peninsula. Without a united Korea to return to, zainichi are a ‘stateless’ migrant community within Japan. As such, Kum’s work deals with borders and migration, political and spiritual, to shed light on “fragmented pieces of darkened history.” After working for activist art projects with North Korean migrants in South Korea, she began exploring ritual performance as part of her on-going project to transform the relationship between living and dying in contemporary society. Awarded multiple awards in Japan, Europe, and the United States, Kum’s work is an urgent examination of the question borders pose in the ‘Post’-Cold War of today.

Soni Kum's visit to Cornell and the Writing/Borders conference are hosted by the Cornell East Asia Program and generously co-sponsored by the Central New York Humanities Corridor from an award by the Andrew W. Mellon Foundation, the Mario Einaudi Center for International Studies, the Society for the Humanities, the Department of Asian Studies, the Department of Comparative Literature, and the Cornell Institute for European Studies.