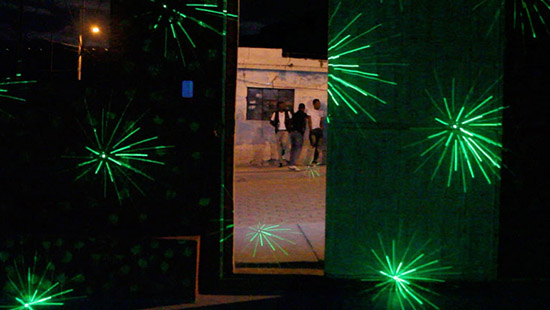 Alexandra Cuesta is a 2018 Guggenheim Fellow. Her films and videos combine experimental film traditions along with documentary practices, and investigate the reciprocity of the gaze in time-based representation. Some of the ideas she explores include the construction of place, instances of displacement, and social structures. Her images often depart from the public sphere and highlight the poetics of the common experience. As film scholar and critic Nicole Brenez states, Cuesta's cinema has the capacity to unveil, within Merleau-Pontian terms, "the astounding 'gloria' of the ordinary." She received her M.F.A. in film and video from the California Institute of the Arts and her B.F.A. in photography from Savannah College of Art and Design. In 2018 she was awarded a MacDowell Colony Fellowship and residency.

Abstract:
Territorio is a poetic portrait of Ecuadorians shot in their environs. Deriving its structure from the travel journals of avant-garde poet Henri Michaux, the film follows Michaux's journey across Ecuador, observing its citizens in independent, subtly-composed static shots. "Cuesta speaks to an inescapable truth of all observation that most films seek to play down: no one remains unaffected by being observed and the moments which actively reflect this are at least as valuable as those that don't." (Senses of Cinema)

The film will be preceded by Cuesta's short 16mm film Piensa en mí (2009, 15 mins): Moving from east to west and back, the windows of a bus frame fleeting sections of urban landscape. Throughout the day, images of riders, textures of light and fragments of bodies in space come together to weave a portrait in motion; a contemplative meditation on public transport in the city of Los Angeles. Isolation, routine, and everyday splendor create the backdrop of this journey, while the intermittent sounds of cars construct the soundscape.

The event is cosponsored with Cornell Cinema, the Latin American Studies Program, and the Cornell Council for the Arts.