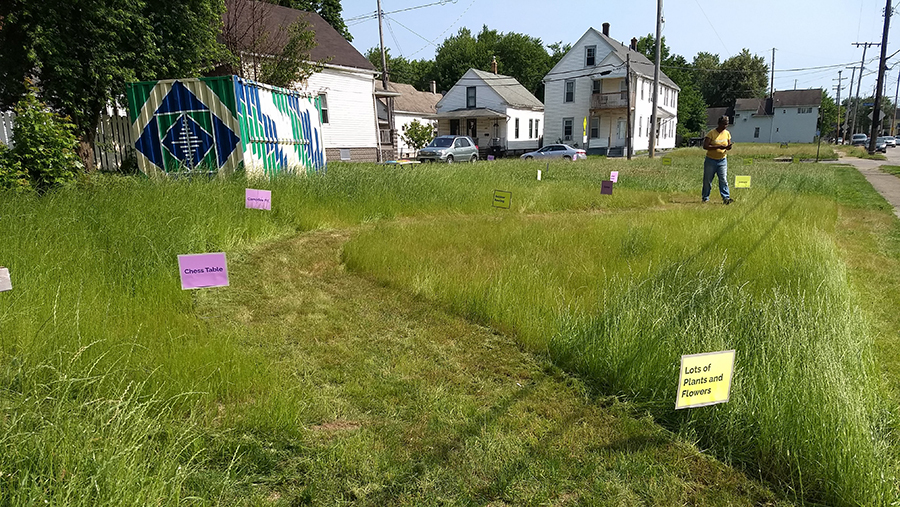 If all of Cleveland's 30,000 vacant parcels were aggregated into a single continuous landmass, it would form the city's 15th largest ward, four-and-a-half times the size of Central Park. Significant efforts by municipalities, nonprofits, private enterprises, and extraordinary people have transformed hundreds of these vacant lots into new parks, gardens, sideyards, and homes. However, for each new space constructed, many thousands of lots remain overlooked, overgrown, and underutilized.

This exhibit traces the summer co-op of Tim Dehm (M.R.P./M.L.A. '21) in Cleveland with the Western Reserve Land Conservancy. At the heart of his experience are the dozens of interviews he conducted to understand the past, present, and future issues around vacant land in Cleveland. These interviews, along with on-the-ground efforts to design a vacant lot and his observations of everyday life in the city, synthesized into a proposal for the conservancy called "Groundwork: A Land Preparation Platform." Groundwork promotes a community-centered, systematic method to address the unique character, memory, and potential that fills each parcel.

This exhibit also includes supporting drawings Dehm has made over the fall semester to understand the significance of vacant land in Cleveland.

Department of City and Regional Planning